As whales fade, movement they spawned tries to keep up hope 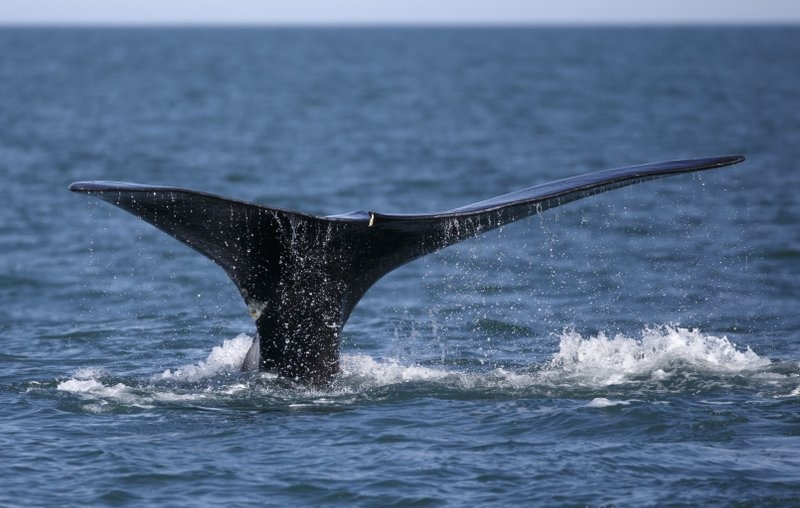 PROVINCETOWN, Mass. (AP) — Regina Asmutis-Silvia, a biologist who has dedicated her career to saving right whales, is cleaning out a file cabinet from the early 1990s, and the documents inside tell a familiar story — the whales are dying from collisions with ships and entanglements in commercial fishing gear, and the species might not survive.

Fast forward through a quarter-century of crawl-paced progress, and it’s all happening again.

“It’s a little scary to think if we hadn’t been working on this all these years, would they have been relegated to history instead of Cape Cod Bay?” said Asmutis-Silvia, of Plymouth, Massachusetts-based Whale and Dolphin Conservation. “We’re standing on the cliff and going, ‘It matters, they’re still here, they’re still something to fight for’.”

Despite eight decades of conservation efforts, North Atlantic right whales are facing a new crisis. The threat of extinction within a generation looms, and the movement to preserve the whales is trying to come up with new solutions.

The whales are one of the rarest marine mammals in the world, numbering about 450. The 100,000-pound animals have been even closer to the brink of extinction before, and the effort to save them galvanized one of the most visible wildlife conservation movements in U.S. history.

But the population’s falling again because of poor reproduction coupled with high mortality from ship strikes and entanglement. Scientists, environmentalists, whale watch captains and animal lovers of all stripes are rallying to renew interest in saving right whales, but many admit to feeling close to defeated.

Charles “Stormy” Mayo, director of the right whale ecology program at the Center for Coastal Studies in Provincetown, and other scientists have said the species could be extinct as soon as 2041. Mayo, a ninth generation resident of Cape Cod whose ancestors harpooned whales in the 18th and 19th centuries, now leads expeditions to find the animals and try to learn how to save them.

“There’s a fair amount of sadness, dealing with these creatures. They are on the brink of extinction now, and their future is truly in doubt,” he said. “I don’t think any of us are discouraged, but many of us are fearful. I certainly am.”

The decline of right whales dates back to the whaling era of centuries ago, when they were targeted as the “right” whale to hunt because they were slow and floated when killed. They were harvested for their oil and meat, and might have dwindled to double digits until international protections took hold in 1935.

Preserving the whales became an international cause, championed by environmentalists, scientists and the U.S. government, and their population grew to about 275 in 1990 and 500 around 2010. But then things changed.

Scientists are still trying to figure out why the whales have lost about 10 percent of their population in just eight years, but one hypothesis places blame on the warming of the Atlantic Ocean. The whales migrate from Georgia and Florida to New England and Canada every year, seeking food. They are aided by a complex system of protected areas, shipping regulations and commercial fishing restrictions that try to ensure safe passage as they gorge on copepods, crustaceans the size of a flea.

But as waters have warmed, the tiny organisms they need to survive appear to be moving, and the whales are following, sometimes putting themselves in harm’s way, said Mark Baumgartner, a scientist with Woods Hole Oceanographic Institution. They also just aren’t eating enough, he said.

“The whales are moving around a lot more and they are not finding food,” he told fishermen at the Maine Fishermen’s Forum in early March.

Last year, there were 17 confirmed right whale deaths — a dozen in Canada, the rest in the United States. Scientists haven’t observed a single new right whale calf this year, another dire development.

Advocates for right whales have turned to touting innovations, engaging with commercial fishing groups and calling for expediting new protections in the U.S. and Canada. But it’s a hard fight greeted by government bureaucracy and skeptical industries concerned about their own survival.

Baumgartner spent some of his presentation at the Maine Fishermen’s Forum talking about a new technology that uses a modem to locate and retrieve lobster fishing line from the ocean floor. The innovation could reduce the number of fixed fishing lines that can cause right whales to become entangled and slowly suffocate.

There were grumbles from fishermen who doubted the viability of the new gear. One called out: “You ever been on a lobster boat?”

Still, advocates see some reasons to be optimistic. Canada recently announced moves to protect the whales by changing the dates of the snow crab season and establishing a permanent speed limit in the Gulf of St. Lawrence.

And this winter, scientists observed a behavior called a “surface active group” for the first time in a year. The whales gather at the surface for males to compete to mate with a female, which scientists hope augurs for a baby whale in the future.

“They can recover. They’re not a hopeless species,” said Asmutis-Silvia. “We just have to stop killing them.”