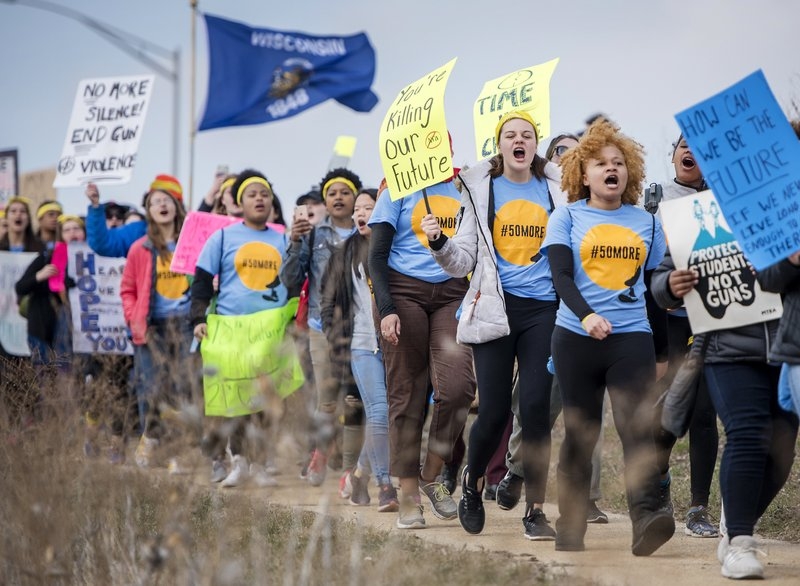 About 50 students set out Sunday from Madison on their “50 Miles More” march. They reached their destination in Janesville and demonstrated in a park for stricter gun laws. Ryan, a Republican who has opposed gun restrictions, is in the Czech Republic on an official visit and was not there when the marchers arrived.

The march came more than a month after a gunman killed 17 students and staff members at Marjory Stoneman Douglas High School in Parkland, Florida.

Bea Windorski said she marched because gun violence “affects every single American, especially the students of America. Enough is enough.”

The students carried signs reading “No more silence! End gun violence” and “Books not bullets,” and they chanted “Hey hey, ho ho, the NRA has got to go.”

One supporter took the podium during the demonstration and broke down in tears.

Katie Eder, one of the march organizers, said she kept moving “because despite so many people telling us that ending gun violence is impossible, it’s too ambitious, it’s too difficult, I believe with every bone in my very sore body that this is the time to do the impossible.”

Not all the speakers were students. Pardeep Kaleka, whose father and five others were fatally shot at a Sikh temple in Oak Creek, Wisconsin, in August 2012, also spoke. He said the students were an answer to his father’s prayers that he said as he was dying.

The students said they want a ban on military-style guns and accessories that turn semi-automatic weapons into automatic weapons. They also want a four-day waiting period for all gun purchases, background checks on all gun sales, and the legal age to buy a gun increased to 21.

Adult volunteers walked with the students, who spent the nights in schools along the route.