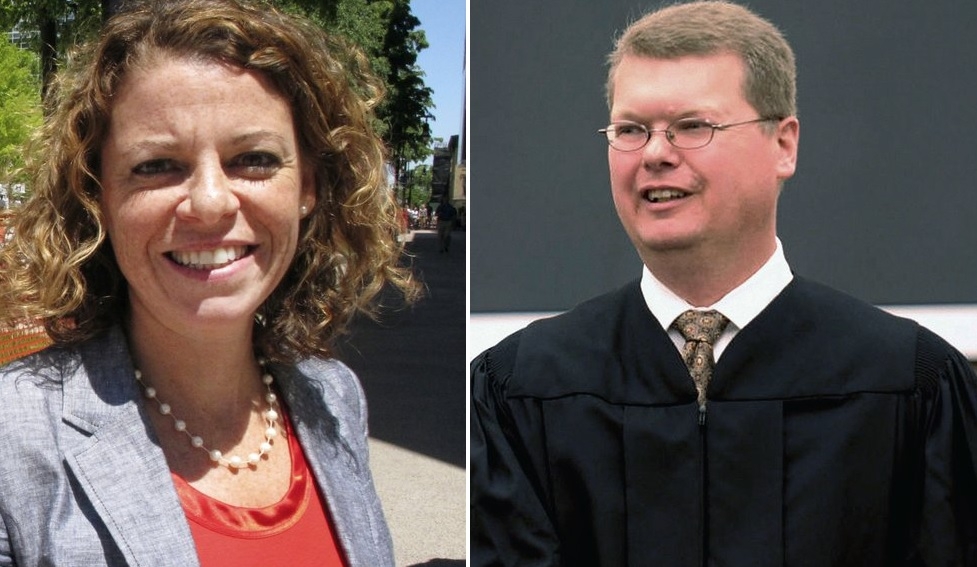 MADISON, Wis. (AP) — The Wisconsin Republican Party and the conservative state business lobby are pouring money into the Supreme Court race in its final days, trying to give Michael Screnock a boost over liberal-backed challenger Rebecca Dallet.

The winner of the April 3 election for a 10-year term on the state’s highest court will replace retiring Justice Michael Gableman, part of the 5-2 conservative majority.

Although the race is officially nonpartisan, the state GOP and other conservative groups have spent heavily to help Screnock, a Sauk County circuit judge. Dallet, a Milwaukee County circuit judge, has the backing of liberals, labor unions, Planned Parenthood and state and local teachers’ unions. She has not received any money from the state Democratic Party or any of its local affiliates.

Reports filed with the state on Monday show of the roughly $900,000 Screnock has raised for the race, 38 percent, or $345,000, came from the state Republican Party. Screnock, who was appointed judge by Republican Gov. Scott Walker in 2015, has received five times more money from the GOP than any other Supreme Court candidate, a review of finance records by the liberal group One Wisconsin Now showed.

“Michael Screnock is bought and paid for by the Republican Party in a way no other candidate has in the history of the state,” said Scot Ross, executive director of One Wisconsin Now.

Screnock’s campaign adviser Sean Lansing argued that it was Dallet, not Screnock, whose ethics should be questioned given that she’s accepted donations from attorneys arguing cases in her courtroom, campaigned for money from Democrats in San Francisco and benefited from spending by a group headed by former U.S. Attorney General Eric Holder who served under then-President Barack Obama.

The National Democratic Redistricting Committee, a group formed by former Holder, has spent $165,000 on digital advertising to help Dallet.

The GOP push for Screnock included $200,000 since the February primary spent on radio ads, direct mail, digital advertising and billboards to help Screnock. The latest ads hit Dallet for attending a fundraiser in San Francisco last week where she told donors, “Your values are our Wisconsin values that we’ve lost along the way.”

An analysis of Dallet’s campaign finance records by the Wisconsin Democracy Campaign shows her largest contributions were $18,000 each from political action committees for the statewide and Madison teachers’ unions.

Outside groups have also increased their spending in the race’s final days. Last week, the state’s largest business lobbying group, Wisconsin Manufacturers and Commerce, launched a new television ad criticizing Dallet for sentencing a man to two years in prison in 2011 for attempted sexual assault of an 8-year-old girl when the maximum sentence was 20 years in prison.

One Wisconsin Now said WMC has spent $588,000 on TV ads to help Screnock so far with another nearly $900,000 booked for the final week of the race.

The Brennan Center for Justice, which tracks spending on television advertising in the race, said as of Tuesday the Dallet campaign had spent nearly $274,000 on TV ads compared with nearly $49,000 by Screnock.

Greater Wisconsin Committee had spent $85,000 on TV ads for Dallet, according to the Brennan Center.

Dallet and Screnock were to meet Friday for their second and final debate, broadcast live statewide on Wisconsin public radio and television.