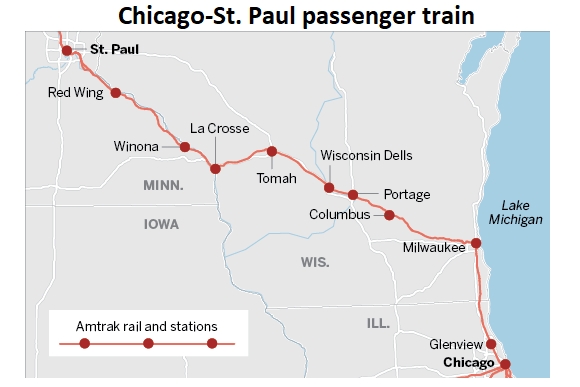 A high-speed rail through La Crosse connecting Chicago and the Twin Cities is shelved in Minnesota, because Wisconsin has backed out.

After Wisconsin Gov. Scott Walker opposed the plan in his state, legislative leaders in St. Paul this week bailed, saying a high-speed rail would be a waste of money since Wisconsin isn’t going along.

Most of the proposed high-speed routes would run through La Crosse to Kenosha.

The Star Tribune noted that, “since 2010, high-speed rail has been a hot-button political issue in Wisconsin. Gov. Walker declined $810 million in federal stimulus money for a Madison-to-Milwaukee line, saying it would be too expensive to build and maintain.

There are no high-speed rails in the U.S. In Europe, high-speed trains run about 150 mph or more. In China, some go as fast as 220 mph.

Amtrak is trying to upgrade track in the Midwest so it can travel 110 mph at some points. The fastest train in the U.S. runs at 150 mph in certain places between Boston and D.C. on Amtrak’s Acela Express.

So, instead of high-speed rail, Minnesota is considering simply adding second Amtrak train between the two metropolises, according to MnDOT specialist Dan Krom.

“It can be put on a shelf, a longer-term vision,” Krom said of the high-speed rail plan.

MnDOT held a public meeting in La Crosse last fall to promote the plans for a second Empire Builder train through the region. It wouldn’t start running for three to four years.

Krom also politely said there are no plans to run high-speed route to the La Crosse area.

“Just between the Twin Cities and La Crosse, we didn’t explore that,” Krom said. “Practically speaking, there wouldn’t be the ridership there would as if it were to carry on to Milwaukee and connect to one of the Hiawathas.”