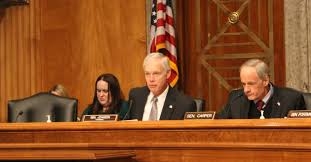 “Everybody was saying that was unacceptable,” Johnson said. “Diplomatic speech hasn’t worked. We finally have a president that’s saying, ‘We’re not going to put up with it.’

Trump’s exact words: “They will be met with fire and fury like the world has never seen.”

Immediately after Trump’s threats, North Korea made another one of its own. The nation said it was drawing up plans to fire four ballistic missiles at Guam.

That provoked the president into another statement.

Johnson, the chairman of the Senate Homeland Security Committee, continued to defend Trump.

“The end of patient strategies, strategic patience, is over,” Johnson said. “Let’s say they launched at Guam. What would we expect the American president to do, other than bring down that fire and fury?

“They are threatening us, and they start launching at our territories. What else are we going to do?”

Here’s what President John F. Kennedy said on Oct. 22, 1962, during the Cuban Missile Crisis, which is followed by Trump’s short speech (read Kennedy’s speech below).

Kennedy: “The 1930s taught us a clear lesson: aggressive conduct, if allowed to go unchecked and unchallenged ultimately leads to war. This nation is opposed to war. We are also true to our word. Our unswerving objective, therefore, must be to prevent the use of these missiles against this or any other country, and to secure their withdrawal or elimination from the Western Hemisphere.

“Our policy has been one of patience and restraint, as befits a peaceful and powerful nation, which leads a worldwide alliance. We have been determined not to be diverted from our central concerns by mere irritants and fanatics. But now further action is required–and it is under way; and these actions may only be the beginning. We will not prematurely or unnecessarily risk the costs of worldwide nuclear war in which even the fruits of victory would be ashes in our mouth–but neither will we shrink from that risk at any time it must be faced.”