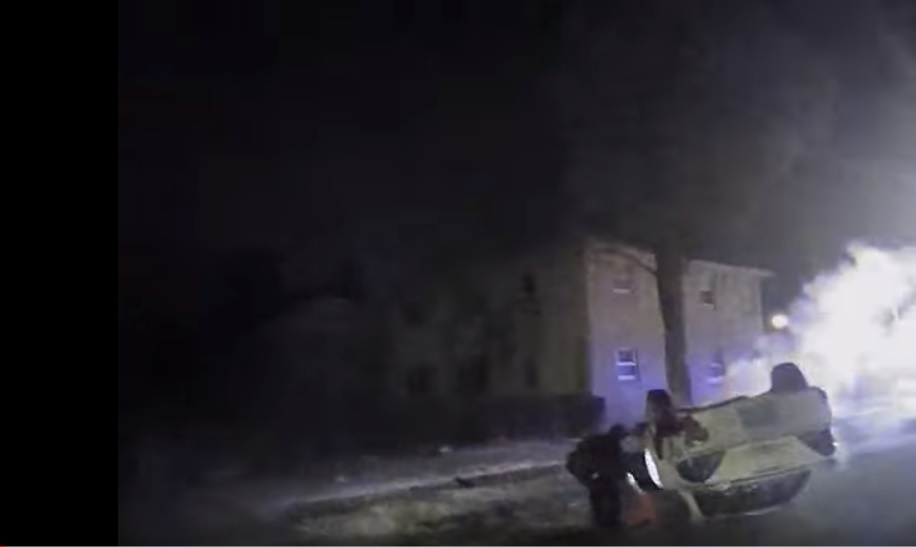 MILWAUKEE — Two young Milwaukee police officers are being hailed as heroes for rescuing two unconscious teenagers from a burning car.

Officers Nicholas Schlei and Nicholas Reid, both 23, were on patrol Tuesday night when a Pontiac Grand Am crashed into a utility pole and overturned. Flames erupted from the car’s engine compartment.

Officers from District Four of the Milwaukee Police Department took their duties to protect and serve to the next level and rescued two occupants of a burning vehicle on the City’s Northwest Side. Officers Nicholas Schlei and Nicholas Reid were on patrol near N. 55th and W. Villard Avenue when they witnessed a 1999 Pontiac Grand Am lose control, strike a utility pole, and start on fire. Officers Schlei, Reid, and other officers from District Four risked their own lives and pulled the driver, a 16-year-old Milwaukee male, and another teenage male passenger from the car. A third teenage male passenger from the vehicle was located nearby. All three victims were transported to a local hospital for treatment of their injuries. The driver of the vehicle will be cited for failure to yield and reckless driving. Officers Schlei and Reid will be nominated for a MPD Merit Award and the Department is grateful for their heroic actions!

One teen escaped by kicking out a window, but the driver and another boy were unconscious, the Milwaukee Journal Sentinel reported.

The two officers managed to pull the 16-year-olds out in less than a minute. Body camera captured the rescues on video.

Reid says he and his partner “knew that we had to get those kids out” and that “there’s no better feeling” than to help save someone.

“I think that officers just like us, and at every Milwaukee police district station, even across the country, they would do the same thing,” Reid said. “Because that’s why we joined and that’s why we’re cops.”

The three teens were taken to a hospital. Police said the driver will be cited for failure to yield and reckless driving.

Schlei and Reid graduated from the Milwaukee police training academy about 2½ years ago. They will be nominated for a Milwaukee Police Department Merit Award.