Franken, soon-to-be-gone, but back at Senate job 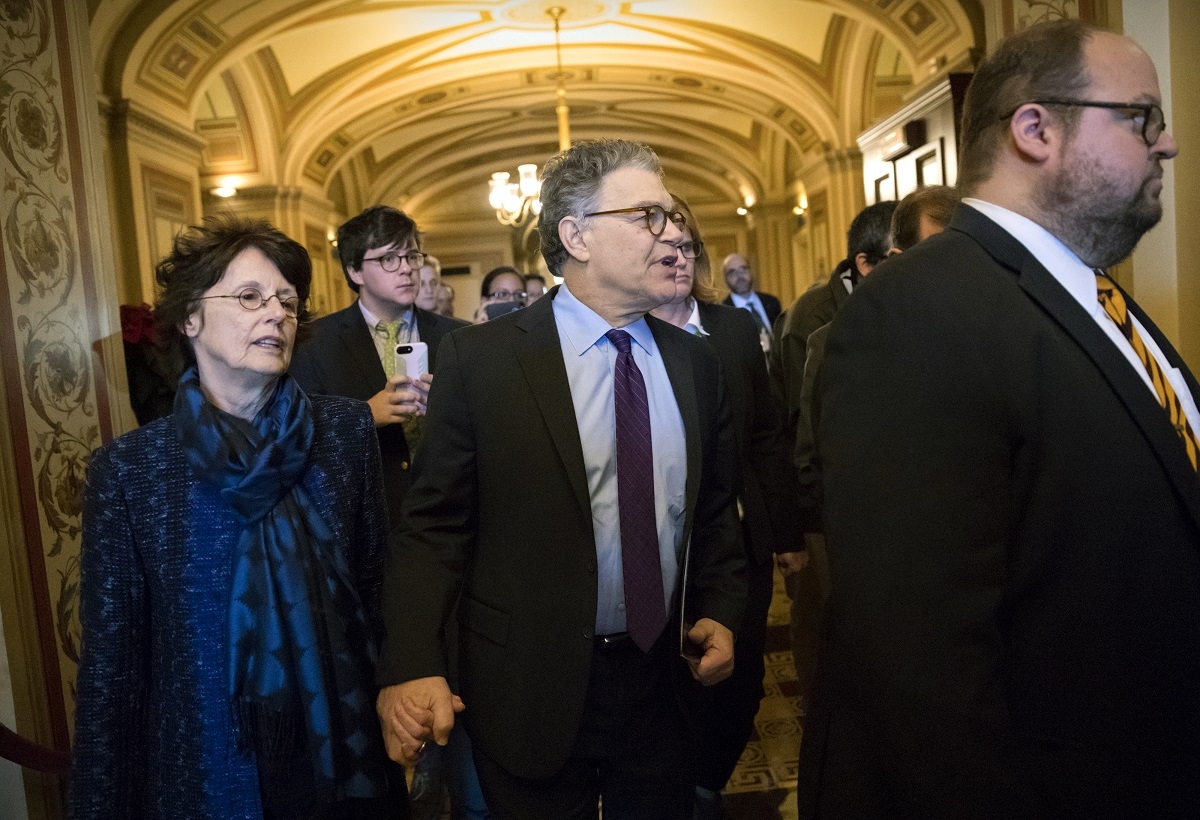 The two-term Minnesota lawmaker told a somber Senate last Thursday he would resign amid multiple allegations of sexual misconduct and in the face of vanishing support from fellow Democrats. Franken was back at work this week, casting votes in the Senate, participating in a committee hearing and attending a senator-only luncheon with Democrats.

Franken listened intently Tuesday as an expert panel talked about the high cost of prescription drugs. He put his hand on his forehead and grimaced as speakers decried the price of life-saving medicines. Given a chance to ask questions, Franken spoke about his work with Republican Sen. Bill Cassidy of Louisiana to allow the government to negotiate lower drug prices under Medicare.

“My colleagues will have to carry forward this work after I’m gone,” Franken said, his sole reference to his impending departure. “I urge them to do so in an expedient and bipartisan manner. Patients, especially those in Minnesota, need relief.”

As Franken left the hearing, he bumped into a group of high school students who were waiting to take a photo with him. The group from Herndon, Virginia, High School had taken a photo with Franken a few weeks earlier, but one of the students was absent, so teacher Meghann Jones brought them back to the Capitol.

Students joked that they were stalking Franken, who patiently shook their hands and posed for a group photo. Franken declined to comment to a reporter.

“He was very nice and respectful to us,” said senior Reed Golomb, 17, who called Franken “Minnesota nice.”

Franken has not said exactly when he will leave the Senate, although his departure seems certain. Even so, some Democrats have begun to have second thoughts about forcing him out so quickly, especially as allegations of sexual misconduct against President Donald Trump remain unresolved and Republican Roy Moore sought a Senate seat from Alabama despite accusations that he molested teenagers decades ago. Moore and Trump have both denied the allegations.

Zephyr Teachout, a Democrat who ran for governor of New York, said in an op-ed in the New York Times that she was left with a sense of that “something went wrong” when Franken announced he was stepping down.

“Zero tolerance (of sexual misconduct) should go hand in hand with two other things: due process and proportionality,” Teachout wrote. “Both were missing in the hasty call for Senator Franken’s resignation.”

Due process “means a fair, full investigation, with a chance for the accused to respond,” Teachout wrote.

Even some Republicans questioned Franken’s ouster.

Former House Speaker Newt Gingrich said the forced resignation “was a lynch mob. Let’s not have due process, let’s not ask anybody any questions, let’s not have any chance to have a hearing, let’s just lynch him.”

Franken, in his resignation speech, said he was “aware that there is some irony in the fact that I am leaving” while Trump remains in office and Moore was able to campaign for the Senate “with the full support of his party.”

Franken, 66, said “all women deserve to be heard” but asserted that some accusations against him were untrue. He called himself “a champion of women” during his Senate career, a man who fought to improve people’s lives.

Minnesota Gov. Mark Dayton was set to announce a replacement Wednesday for Franken amid pressure to choose someone who could keep the seat in Democratic hands in a special election next November.

Dayton has deflected questions about the appointment, but Tina Smith, Dayton’s lieutenant governor and trusted former chief of staff, is widely considered his first choice. A Democratic official told The Associated Press last week that Dayton was ready to choose Smith as a placeholder before coming under pressure from national Democrats to appoint someone who could leverage the appointment into a 2018 run.