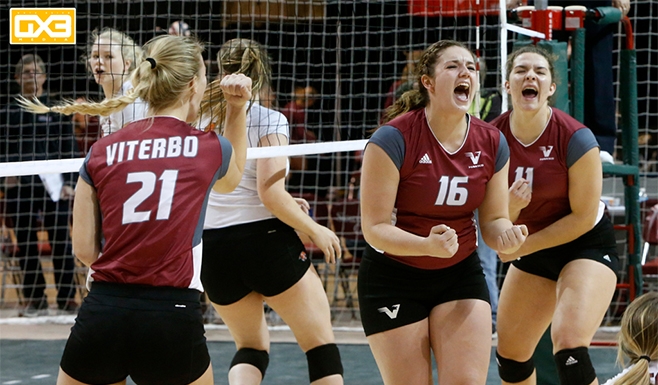 SIOUX CITY, Iowa — It’s back to the Final Four for the third time in four seasons for the Viterbo University volleyball team.

The V-Hawks have since won 16 consecutive matches. The last and only time Viterbo lost this season was Oct. 14 to Rocky Mountain, 3-2, on Oct. 14.

Aside from the 2015 loss to Missouri Baptist in the FInal Four, the V-Hawks also fell in the 2014 semifinals to Brownsville.

Earlier Friday, in the Sweet 16, the V-Hawks swept No. 19 Jamestown (story below).

Viterbo will now play seventh-ranked Park University at 8:15 p.m. tonight for a shot at the Final Four. Park has won 10 consecutive matches. It’s last loss came 3-2 to No. 9-ranked Columbia.

This is the third consecutive year Vitero has gotten to the single-elimination portion of the NAIA tournament.

Last year, the V-Hawks lost in the Sweet 16 to sixth-ranked Westmount (35-3) — a team Viterbo has yet to play but could see at 11 a.m. Saturday in the Final Four.

The V-Hawks lost in the Final Four each of the two seasons before that. In 2015, they lost to No. 13 Missouri Baptist (33-8), which Viterbo could see in the championship if it gets by No. 1 ranked Lindsey Wilson (32-0). Viterbo defeated Missouri Baptist 3-2 on Sept. 1.

In 2014 Final Four, the V-Hawks lost to Brownsville, which is not in the Elite Eight.

In the win Friday afternoon, Amelia Grahn had 40 assists and 11 digs for Viterbo, which has now swept 13 consecutive opponents. The last time the V-Hawks didn’t sweep a team, it was Jamestown, in a 3-2 win on Oct. 21.

The last and only time Viterbo lost this season was Oct. 14 to Rocky Mountain, 3-2, on Oct. 14. The V-Hawks have since won 16 consecutive matches.