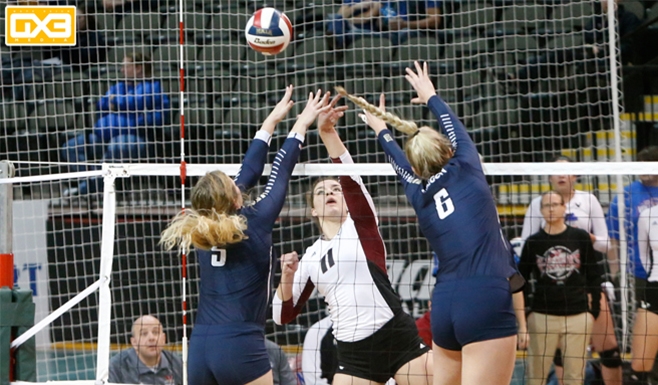 Grahn, the school’s all-time leader in assists, had 30 in the win but, perhaps even more impressive, the senior added 20 digs.

“That’s unbelievable,” said Viterbo coach Ryan DeLong, whose team now has 12 consecutive sweeps.. “She was a defensive machine out there.”

Ironically enough, the last team Viterbo didn’t sweep was Jamestown. And, at 1 p.m. Friday, the V-Hawks (37-1) open the single-elimination portion of the NAIA tournament against … 19th-ranked Jamestown (23-9).

“We feel good about this matchup but they’re a good team, a solid team and they’re going to be a tough match for us,” DeLong said.

In the sweep Thursday at the Tyson Center, freshman Maya Roberts came up big for the V-Hawks with 13 kills, while the school’s No. 2 all-time leader in kills, Natalie Geidel, added 11.

“A big game in a big situation from a freshman, that was exciting for us to see,” DeLong said of Roberts’ performance. “We need different people to step at different times. Natalie is going to get her kills and then, it just depends on who’s hot that night. Roberts had a huge game.”

Not to be outdone by those two, Grahn also got herself into the action.

“Like the quarterback, she’s leading the offense,” DeLong said of her 30 assists, “but she had six kills to go along with that.

“You expect that, but at the same time, that’s pretty incredible. We wish she would be even more selfish but she likes to dish the ball more than attack.”

Libero Baylee Gross added 16 digs for the V-Hawks, who will play in the Elite 8 at 8:15 p.m. Friday if they beat Jamestown.