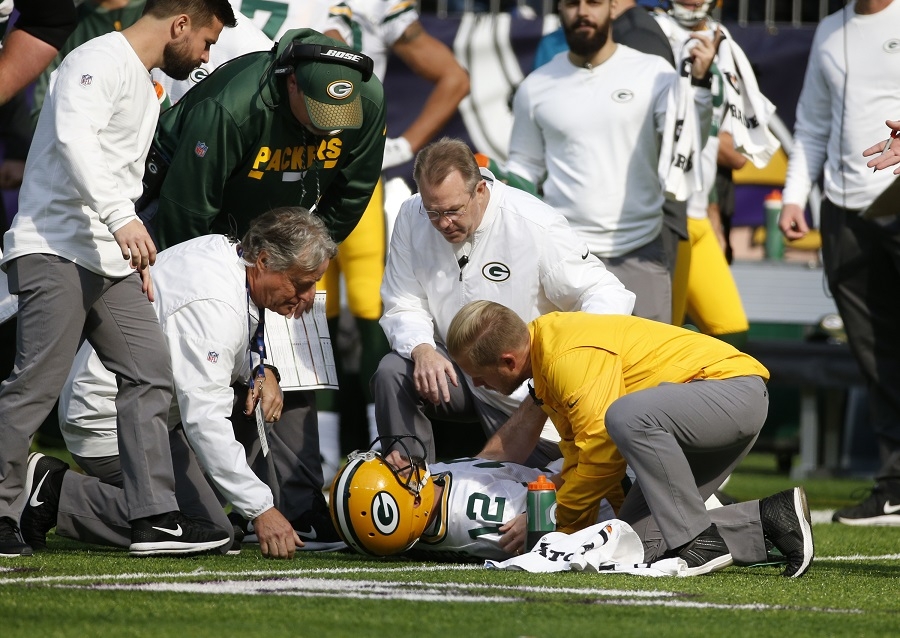 MINNEAPOLIS — Walking gingerly to the sideline with his throwing shoulder throbbing in pain, Aaron Rodgers turned back toward the field and barked at Minnesota Vikings linebacker Anthony Barr.

Rodgers likely already knew that his season was in jeopardy after Barr’s hit broke his collarbone, and the fiery quarterback’s frustration boiled over.

Now the Green Bay Packers have to try to make sure their season as a whole doesn’t go down the drain with it.

Rodgers was knocked out of the 23-10 loss to the Vikings in the first quarter on Sunday with an injury that could cause him to miss the remainder of the season .

It’s a crushing blow to a team that entered the season with Super Bowl aspirations, optimism based primarily on the right arm of one of the game’s best quarterbacks.

“It’s devastating,” receiver Randall Cobb said. “No question about it. First and foremost, that is one of my closest friends, so to see him go down with that is tough. We still have to play football. We have a long season ahead of us to figure out what we are going to do.”

Brett Hundley, the only other quarterback on the roster outside of practice squad player Joe Callahan, was rushed into duty. He finished 18 of 33 for 157 yards with one touchdown and three interceptions.

“Losing Aaron Rodgers speaks for itself,” Packers coach Mike McCarthy said. “In my opinion, he’s the best player in football. This is the ultimate team game. We need to be better with the 11 people on the field that we have, regardless of the phase that we’re in. Ultimately that’s my responsibility.”

Colin Kaepernick, who has had difficulty finding a job since becoming the face of league-wide demonstrations during the national anthem that protest social injustice, and Tony Romo, who joined CBS as an analyst after retiring from the Dallas Cowboys, could be outside options to fill in for Rodgers. But McCarthy said after the game he was not considering anything like that yet.

“Brett Hundley and Joe Callahan, that’s what we’re going with,” he said.

Despite several key injuries to the secondary, the Packers entered the game Sunday against their NFC North rivals at 4-1 after Rodgers engineered a game-winning touchdown drive to beat the Dallas Cowboys last week.

Vikings coach Mike Zimmer’s defense has always gotten after Rodgers in these tense matchups, and it happened again in the first quarter when Barr drove him into the turf after he got rid of a roll-out pass.

The impact did not appear to be that violent at first glance as Rodgers rolled through the hit. But it became apparent quickly that he was in considerable pain. He writhed on the turf as McCarthy argued for a roughing the passer penalty.

“I know Anthony Barr personally,” said Hundley, a fellow UCLA alum. “I wouldn’t imagine he’s a dirty player. I didn’t really get a good look at it.”

Rodgers rode a cart to the locker room for further tests and remained there throughout the first half. He was initially deemed questionable, but the Packers announced after halftime that he would not return to the game.

“He’s the best in the game so I hate to see that for him,” Vikings safety Harrison Smith said.

Since becoming the full-time starter in 2008, Rodgers has been remarkably durable. He missed seven games in 2013 with a fractured collarbone, but he has started 132 of the other 134 games during that time period.

Of course, being able to count on a quarterback to take the snaps is nothing new for Green Bay. Since Brett Favre took over for the injured Don Majkowski in the third game of the 1992 season, the Packers have had Favre and Rodgers for all but nine games.

Matt Flynn, Scott Tolzien and Seneca Wallace were forced to fill in while Rodgers was out in 2013 and the Packers went 2-4-1 in that stretch. Flynn started once in 2010 when Rodgers sat out with a concussion and again in 2011 when he rested during the regular-season finale with the Packers having clinched the top seed in the NFC playoffs.

Favre never sat at all.

Hundley had only thrown 11 passes over the course of his first two-plus seasons in the league before jumping in on Sunday.

“I hope @AaronRodgers12 is OK!” Seahawks cornerback Richard Sherman tweeted. “The league is better when he’s healthy. Praying for you.”