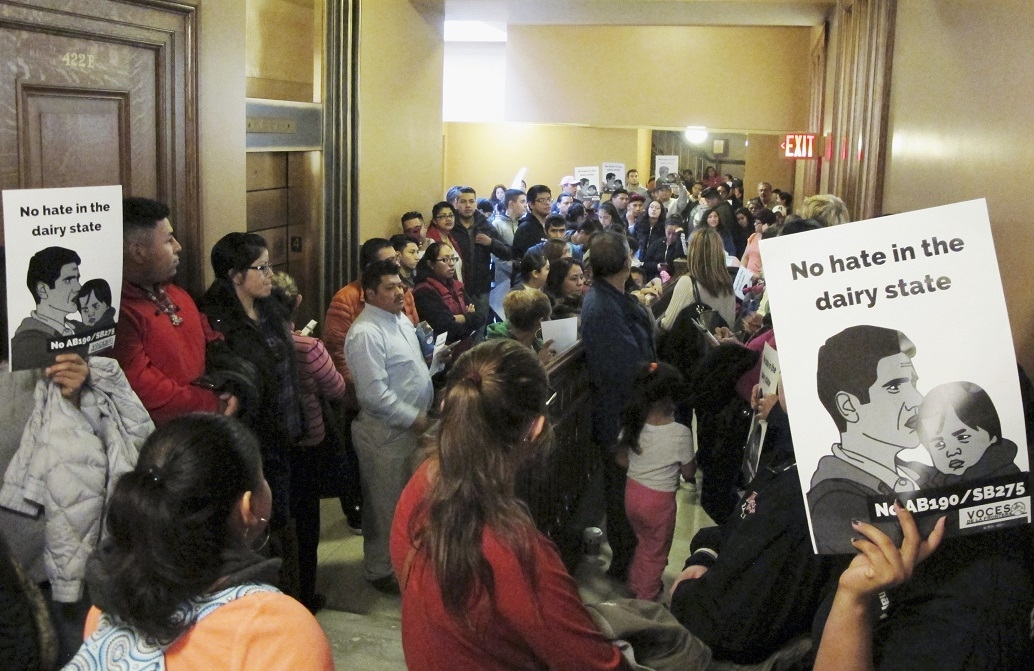 MADISON, Wis. — Hundreds of people flooded the Wisconsin Capitol on Thursday to oppose legislation targeting “sanctuary cities,” as state Republicans align with President Donald Trump’s attempts to crack down on local laws aimed at protecting immigrants who are illegally living in the U.S.

The Republican-backed bill would bar local governments from passing ordinances, approving policies or taking other steps to prevent enforcement of federal immigration laws. The legislation also targets those that don’t share information with federal immigration authorities.

Violations of the proposed law would result in local governments losing as much as $5,000 a day in state funding.

Wisconsin Gov. Scott Walker has been lukewarm on the state legislation. Last year, he was “just fine” with the Legislature not passing the bill. Walker spokesman Tom Evenson said that the governor will evaluate the bill should it pass.

“Sanctuary cities do not make our communities safer,” the bill’s sponsor, Republican Sen. Steve Nass of Whitewater, said during a legislative committee hearing where opponents overflowed the meeting room. “These politically correct policies actually increase the risk to public safety in order to make a political statement regarding federal immigration laws.”

Nass cited the 2015 fatal shooting of a woman by an immigrant in San Francisco who the local sheriff’s office released earlier that year despite a request by federal immigration authorities to detain him. Under the legislation, local communities would have to comply with any request made by the U.S. Immigration and Customs Enforcement to detain an immigrant who may be in the country illegally.

Opponents say the plan would give sweeping federal powers to local law enforcement agencies and public employees to interrogate, arrest, and deport immigrants who are not living in the country legally. They argue it also would chill relations between the immigrant community and law enforcement.

Numerous groups were lined up in opposition Thursday, including the Wisconsin Catholic Conference, the city of Milwaukee, immigrant rights group Voces de a Frontera and the Wisconsin Farmers Union. Hundreds of individuals also were bused in from across the state to speak out against the bill, similar to efforts last year that helped kill similar legislation.

Dairy farmer John Rosenow said in prepared testimony that more than 80 percent of the milk sold on Wisconsin dairy farms is harvested by immigrants, many of them from Mexico. He said the legislation would make it even more difficult to fill those jobs.

“We dairy farmers need immigrants to work on farms to help the industry to continue to be robust,” Rosenow said.

In January, Trump signed an executive order to withdraw funding from sanctuary cities that decline to cooperate with federal immigration authorities. And earlier this year, the U.S. Justice Department listed Milwaukee County among 10 locations it was scrutinizing to determine if they should lose some federal grant money for failing to prove they were adhering to federal immigration law.

The U.S. Department of Justice informed the county on Thursday, as the hearing was ongoing, that it had found no evidence it was hindering enforcement of immigration laws.