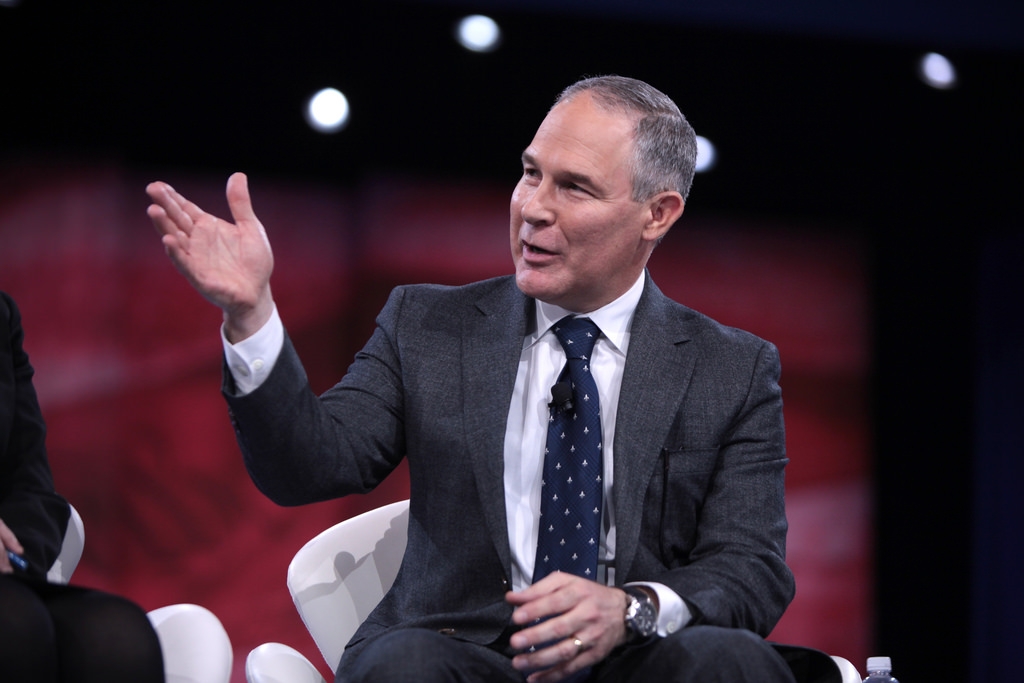 HAZARD, Ky. — A coalition of states and environmental groups are vowing to fight the Trump administration’s move to kill an Obama-era effort to limit carbon emissions from coal-fired power plants.

“The war on coal is over,” Pruitt declared, adding that no federal agency should ever use its authority to “declare war on any sector of our economy.”

It was not immediately clear if Pruitt would seek to issue a new rule without congressional approval, which Republicans had criticized the Obama administration for doing. Pruitt’s rule wouldn’t become final for months, and is then highly likely to face a raft of legal challenges.

New York Attorney General Eric Schneiderman was among those who said they will sue.

“The Trump Administration’s persistent and indefensible denial of climate change — and their continued assault on actions essential to stemming its increasing devastation — is reprehensible, and I will use every available legal tool to fight their dangerous agenda,” said Schneiderman, a Democrat.

For Pruitt, getting rid of the Clean Power Plan will mark the culmination of a long fight he began as the elected attorney general of Oklahoma. Pruitt was among about two dozen attorney generals who sued to stop Obama’s 2014 push to limit carbon emissions, stymieing the limits from ever taking effect.

Closely aligned with the oil and gas industry in his home state, Pruitt rejects the consensus of scientists that man-made emissions from burning fossil fuels are the primary driver of global climate change.

President Donald Trump, who appointed Pruitt and shares his skepticism of established climate science, promised to kill the Clean Power Plan during the 2016 campaign as part of his broader pledge to revive the nation’s struggling coal mines.

In his order Tuesday, Pruitt is expected to declare that the Obama-era rule exceeded federal law by setting emissions standards that power plants could not reasonably meet.

Pruitt appeared at an event with Senate Majority Leader Mitch McConnell at Whayne Supply in Hazard, Kentucky, a company that sells coal mining supplies. The store’s owners have been forced to lay off about 60 percent of its workers in recent years.

While cheering the demise of the Clean Power Plan as a way to stop the bleeding, McConnell conceded most of those lost jobs are never coming back.

“A lot of damage has been done,” said McConnell, a Kentucky Republican. “This doesn’t immediately bring everything back, but we think it stops further decline of coal fired plants in the United States and that means there will still be some market here.”

Obama’s plan was designed to cut U.S. carbon dioxide emissions to 32 percent below 2005 levels by 2030. The rule dictated specific emission targets for states based on power-plant emissions and gave officials broad latitude to decide how to achieve reductions.

The Supreme Court put the plan on hold last year following legal challenges by industry and coal-friendly states. Even so, the plan helped drive a recent wave of retirements of coal-fired plants, which are also being squeezed by low cost natural gas and renewable power. In the absence of stricter federal regulations curbing greenhouse gas emissions, many states have issued their own mandates promoting energy conservation.

The withdrawal of the Clean Power Plan is the latest in a series of moves by Trump and Pruitt to dismantle Obama’s legacy on fighting climate change, including the delay or roll back of rules limiting levels of toxic pollution in smokestack emissions and wastewater discharges from coal-burning power plants.

On Thursday, Trump nominated former coal-industry lobbyist Andrew Wheeler to serve as Pruitt’s top deputy at EPA — one of several recent political appointees at the agency with direct ties to the fossil fuel interests.

The president announced earlier this year that he will pull the United States out of the landmark Paris climate agreement. Nearly 200 countries have committed to combat global warming by reducing carbon dioxide and other greenhouse gases that contribute to global warming.

“This president has tremendous courage,” Pruitt said Monday. “He put America first and said to the rest of the world we are going to say no and exit the Paris Accord. That was the right thing to do.”

Despite the rhetoric about saving coal, government statistics show that coal mines currently employ only about 52,000 workers nationally — a modest 4-percent uptick since Trump became president. Those numbers are dwarfed by the jobs created by building such clean power infrastructure as wind turbines and solar arrays.

“Trump is not just ignoring the deadly cost of pollution, he’s ignoring the clean energy deployment that is rapidly creating jobs across the country,” said Michael Brune, executive director of the Sierra Club.