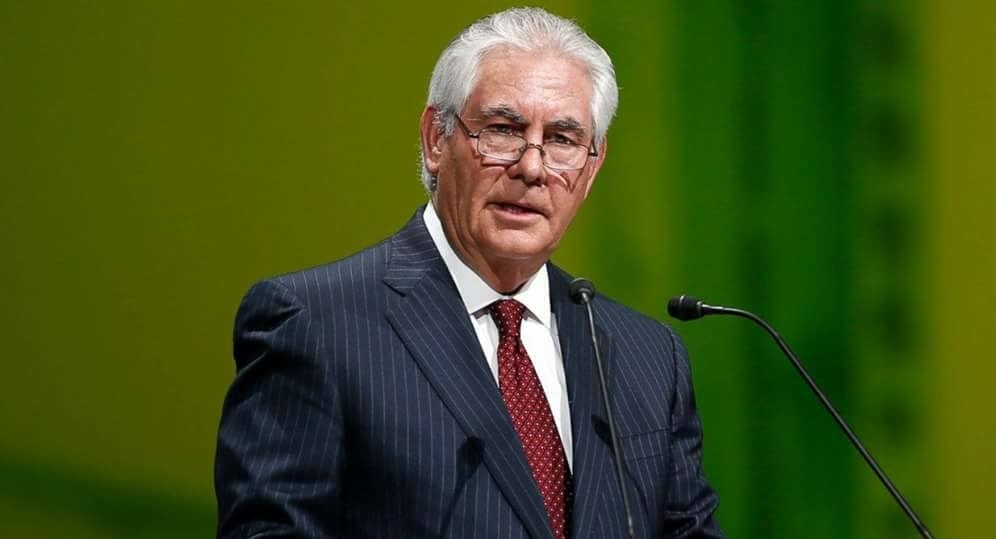 Trump also on Twitter called out out past
presidents in their dealing with N. Korea — sort of

WASHINGTON — President Donald Trump said Sunday that Secretary of State Rex Tillerson was “wasting his time” trying to negotiate with North Korea over its nuclear and missile programs, raising speculation about whether Trump could be undermining efforts to maintain channels of communication or somehow bolstering the diplomat’s hand in possible future talks.

I told Rex Tillerson, our wonderful Secretary of State, that he is wasting his time trying to negotiate with Little Rocket Man…

…Save your energy Rex, we’ll do what has to be done!

Trump also doesn’t seem to understand, from his tweet below, that there have literally been three different leaders in power of North Korea in the past 25 years. Current North Korean Dictator Kim Jong Un was 8-years-old when Bill Clinton was elected president. Kim Jong Un took power in 2011 upon the death of his father Kim Jong-il. And, before that Kim Il-sung was dictator until 23 years ago, when he died in 1994.

Being nice to Rocket Man hasn’t worked in 25 years, why would it work now? Clinton failed, Bush failed, and Obama failed. I won’t fail.

It was not immediately clear what prompted Trump’s tweets, among a series of weekend posts that ranged from hurricane recovery efforts in Puerto Rico to NFL players’ allegiance to the national anthem, and at whom they were aimed: Tillerson, North Korean leader Kim Jong Un, those pushing for continued diplomacy, those favoring a military response to repeated provocations.

Tillerson had acknowledged on Saturday, after meetings in Beijing with Chinese leaders, that the Trump administration was keeping open direct channels of communications with North Korea and probing the North’s willingness to talk.

He provided no elaboration about those channels or the substance of any discussions. After he left China, his spokeswoman issued a statement saying that North Korean officials “have shown no indication that they are interested in or are ready for talks regarding denuclearization.”

And then Trump weighed in the next day with tweets that included his usual personal dig at Kim.

“I told Rex Tillerson, our wonderful Secretary of State, that he is wasting his time trying to negotiate with Little Rocket Man … Save your energy Rex, we’ll do what has to be done!”

Trump offered no further explanation, but last month he told the U.N. General Assembly that if the U.S. is “forced to defend itself or its allies, we will have no choice but to totally destroy North Korea.”

Later, after Trump arrived at an international golf competition at a northern New Jersey course, a new tweet appeared: “Being nice to Rocket Man hasn’t worked in 25 years, why would it work now? Clinton failed, Bush failed, and Obama failed. I won’t fail.”

To a senior Tillerson adviser, there was no ambiguity in Trump’s earlier posts.

U.S.-North Korean communications are long-standing. They include the two nations’ U.N. missions, regular exchanges between senior diplomats, and unofficial discussions between North Korean officials and former U.S. officials. Diplomats say there have been no new channels established recently, or any dramatic shift in Trump administration policy.

Some commentators seized on Trump’s tweets as evidence that he was either undermining Tillerson personally or his diplomacy, or both. Others said the tweets might represent a “good cop-bad cop approach” to North Korea that may or may not be misguided or bear fruit.

Still others saw Trump’s words as an attempt to give Tillerson diplomatic cover and potentially strengthen his hand in persuading North Korea to come to the table by declaring the effort a “waste of time” that the U.S. could abandon at any time in favor of tightening sanctions even further or a military response.

Sen. Bob Corker, chairman of the Senate Foreign Relations Committee, said the U.S. “absolutely” should step up diplomatic efforts. “We’re moving to a place where we’re going to end up with a binary choice soon,” Corker told NBC’s “Meet the Press” in an interview before Trump had tweeted.

“I think Tillerson understands that every intelligence agency we have says there’s no amount of economic pressure you can put on North Korea to get them to stop this program because they view this as their survival,” Corker said.

He added: “If we don’t ramp up the diplomatic side, it’s possible that we end up cornered.”

The main goal of the initial contacts through the diplomatic back-channel between the Trump State Department and North Korea’s mission at the United Nations was the freedom of several American citizens imprisoned in North Korea, although U.S. officials have told The Associated Press there were broader discussions about U.S.-North Korean relations.

Those contacts, however, have failed to reduce the deep mistrust between the adversaries.

North Korea has in recent months tested long-range missiles that potentially could reach the U.S., and on Sept. 3 conducted its largest nuclear test explosion to date. The standoff has entered a new, more dangerous phase since then as Kim and Trump have exchanged personal insults and threats of war.