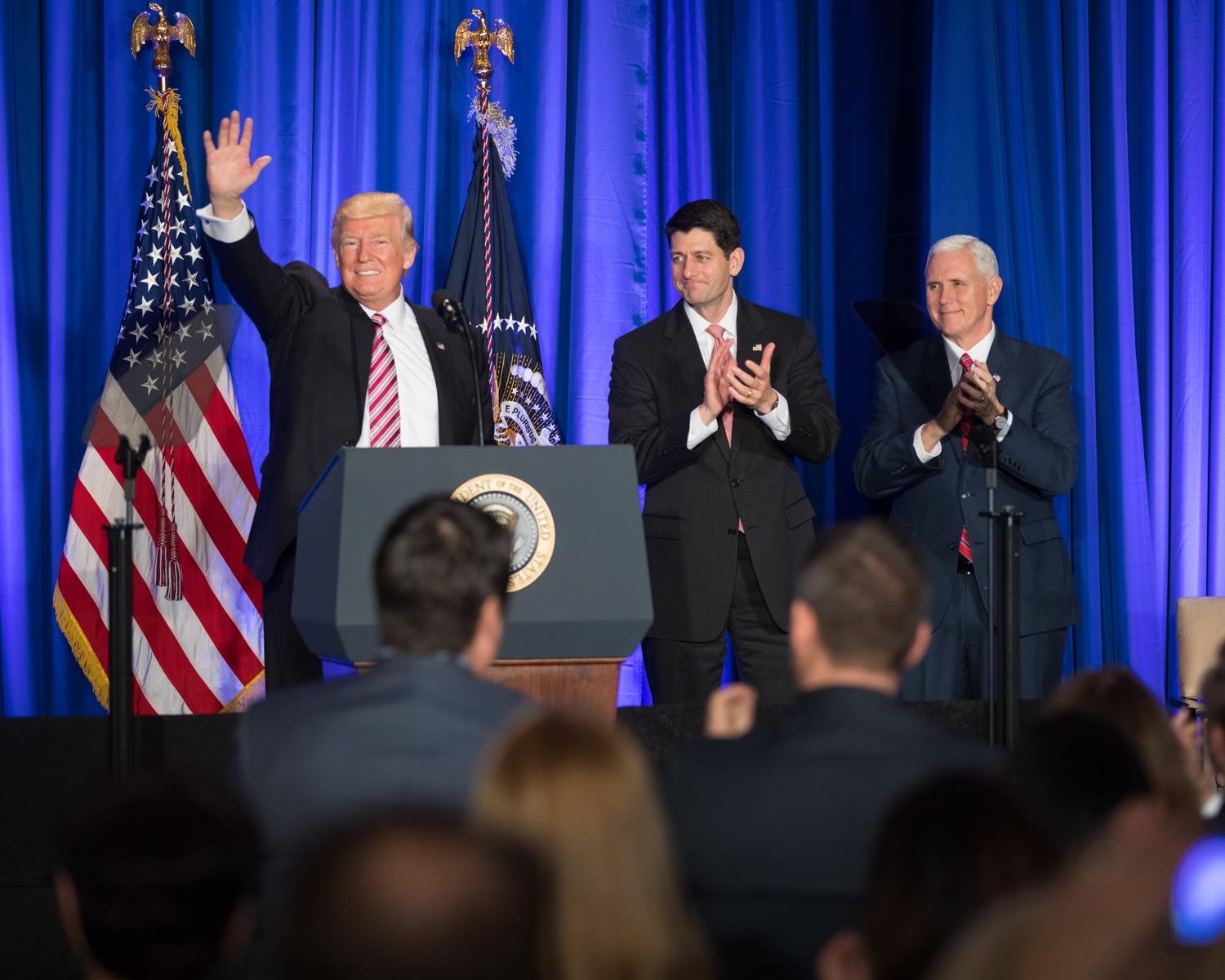 WASHINGTON — House Speaker Paul Ryan backed off months of promises that the Republicans’ tax plan won’t add to the nation’s ballooning deficit, declaring Wednesday in an AP Newsmaker interview that the most important goal of an overhaul is economic growth.

Asked twice whether he would insist the emerging tax plan won’t pile more billions onto the $20 trillion national debt, Ryan passed up the chance to affirm that commitment. GOP leaders made that “revenue neutral” promise in a campaign manifesto last year and many times since.

Ryan’s comments signaling possible retreat on a core GOP commitment came amid quickening action on taxes, which Republicans view as their last, best chance to notch a significant accomplishment to take to voters in the 2018 midterm elections following the collapse of their “Obamacare” repeal drive. Yet even as President Donald Trump hunted for Democratic votes for a plan that’s not yet taken shape, and GOP leaders laid out an aggressive timetable to lawmakers, significant hurdles remained.

A major one is the GOP’s failure, thus far, to pass a federal budget, which under legislative rules is a prerequisite for a tax plan that can avoid being stalled to death by Democrats in the Senate.

Others involve the contents of the tax blueprint itself, which Ryan and his lieutenants envision as a far-reaching reform plan that would significantly lower rates for corporations and individuals while cleaning up the loophole-ridden code. One problem is that every tax deduction has its own constituency, and Ryan has already ruled out eliminating some of the most popular ones, including deductions for home mortgages and charitable giving.

Objections also threaten from the GOP’s seemingly shrinking ranks of deficit hawks if Ryan, Trump and Senate Majority Leader Mitch McConnell do try to move forward with a tax plan that could cost hundreds of billions of dollars, without paying for it with cuts in federal spending or some new sources of revenue. Sen. Bob Corker, R-Tenn., chairman of the Foreign Relations Committee, issued a statement earlier this week calling the debt the “greatest threat to our nation,” greater than North Korea, Russia or the Islamic State group.
Ryan made his comments on taxes as he discussed a range of issues with the AP, including immigration, where he pledged to find a solution for the nearly 800,000 immigrants brought to this country as children and now here illegally. He declared that removing them all is “not in our nation’s interest,” though he declined to reaffirm his past support for eventual citizenship for the “Dreamers.”

He said any immigration solution must include border security measures, though he said a wall along the entire southern border, which Trump has repeatedly urged, doesn’t make sense.

On taxes, Trump himself added to the complications when he surprisingly declared, at a meeting with a bipartisan group of House members, that taxes on the wealthy would not go down under the GOP plan and might even go up. Although the administration has not provided specifics on its plan, House Republicans have embraced an approach that would lower the top individual rate from 39.6 percent to 33 percent, which would be enormously beneficial to the wealthiest Americans.

Trump reiterated that he hoped to lower the top corporate tax rate from 35 to 15 percent, something Ryan has already ruled out as impractical — and an idea the president himself has backed off from, according to people with knowledge of a meeting he held Tuesday night with bipartisan senators.

The president added, improbably, that the individual rate would be even lower than that.

The long list of difficulties has led some analysts to conclude that Congress is likelier to settle on straightforward tax cuts than on full-blown reform — if it passes anything at all.

But Ryan rejected that approach, telling the AP, “It’s not just narrow cuts in taxes that will do the job.”

Referencing tax cuts signed by President George W. Bush, Ryan said, “You can’t just do what Bush did in 2001 and 2003. You have to overhaul the system itself to put American businesses and the American economy in a much more competitive situation.”

Earlier Wednesday, Ryan and House Ways and Means Chairman Kevin Brady met behind closed doors with GOP lawmakers to lay out a timetable on taxes, pledging a detailed blueprint from top congressional Republicans and administration officials in the final week of September. The goal, which Ryan reiterated Wednesday, is to send Trump a bill to sign before year’s end.

The challenges were immediately apparent as House Republicans left the meeting with Ryan and Brady complaining they still didn’t know what was going on. And some conservatives were voicing concerns about Trump’s newfound fondness for making deals with Democrats, as he did last week on the debt ceiling with House Minority Leader Chuck Schumer of New York and House Minority Leader Nancy Pelosi of California.

After Schumer and Pelosi had dinner at the White House Wednesday night, they said they had reached agreement with Trump to protect the DACA immigrants and fund some border security enhancements — not including Trump’s long-sought border wall.

No Republicans were present at the dinner save the president, who was once a Democrat.

“The problem here is we don’t have a clue what’s in the tax plan,” said Rep. Dave Brat, R-Va. “Now Trump is talking about doing bipartisan stuff with Chuck and Nancy on taxes. And I don’t want to open the door to that until we see what this tax plan looks like.”