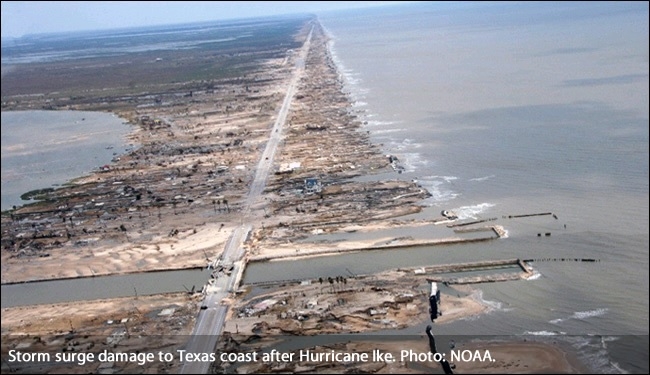 HOUSTON — The latest weather forecast delivered hope to Houston after five days of torrential rain submerged the nation’s fourth-largest city: Less than an inch of rain and perhaps even sunshine.

But the dangers remain far from over. With at least 18 dead and 13,000 people rescued in the Houston area and surrounding cities and counties in Southeast Texas, others were still trying to escape from inundated homes. Weakened levees were in danger of failing and a less-ferocious but still potent Harvey was on track to slam into Louisiana overnight.

Authorities expected the human toll to continue to mount, both in deaths and in tens of thousands of people made homeless by the catastrophic storm that is now the heaviest tropical downpour in U.S. history. In all, more than 17,000 people have sought refuge in Texas shelters, and that number seemed certain to increase, the American Red Cross said.

The city’s largest shelter housed 10,000 of the displaced as two additional mega-shelters opened Tuesday for the overflow. Louisiana’s governor offered to take in Harvey victims from Texas, and televangelist Joel Osteen opened his Houston megachurch, a 16,000-seat former arena, after critics blasted him on social media for not acting to help families displaced by the storm.

In an apparent response to scattered reports of looting, a curfew was put into effect from midnight to 5 a.m., with police saying violators would be questioned, searched and arrested.

Meanwhile, a much-weakened Tropical Storm Harvey was steering into new territory. Meteorologists said Harvey was forecast to come inland Wednesday around the Texas-Louisiana line close to Beaumont, Texas, with 45 mph winds and heavy rains, slogging through Louisiana much of the day before taking its downpours north. Arkansas, Tennessee and parts of Missouri are on alert for Harvey flooding in the next couple of days.

“Once we get this thing inland during the day, it’s the end of the beginning,” said National Hurricane Center meteorologist Dennis Feltgen. “Texas is going to get a chance to finally dry out as this system pulls out.”

But Feltgen cautioned: “We’re not done with this. There’s still an awful lot of real estate and a lot of people who are going to feel the impacts of the storm.”

Still, the reprieve from the rain in Houston was welcome.

Eugene Rideaux, a 42-year-old mechanic who showed up at Osteen’s Lakewood Church to sort donations for evacuees, said he had not been able to work or do much since the storm first hit, so he was eager to get out of his dark house and help.

“It’s been so dark for days now, I’m just ready to see some light. Some sunshine. I’m tired of the darkness,” Rideaux said. “But it’s a tough city, and we’re going to make this into a positive and come together.”

The city has asked the Federal Emergency Management Agency for more supplies, including cots and food, for an additional 10,000 people, said Houston Mayor Sylvester Turner, who hoped to get the supplies no later than Wednesday.

Four days after the storm ravaged the Texas coastline as a Category 4 hurricane, authorities and family members reported at least 18 deaths from Harvey. They include a former football and track coach in suburban Houston and a woman who died after she and her young daughter were swept into a rain-swollen drainage canal. Two Beaumont, Texas, police officers and two fire-rescue divers spotted the woman floating with the child, who was holding onto her mother.

Authorities acknowledge that fatalities from Harvey could soar once the floodwaters start to recede from one of America’s largest metropolitan centers.

A pair of 70-year-old reservoir dams that protect downtown Houston and a levee in a suburban subdivision began overflowing Tuesday, adding to the rising floodwaters.

Engineers began releasing water from the Addicks and Barker reservoirs Monday to ease the strain on the dams. But the releases were not enough to relieve the pressure after the relentless downpours, Army Corps of Engineers officials said. Both reservoirs are at record highs.

The release of the water means that more homes and streets will flood, and some homes will be inundated for up to a month, said Jeff Linder of the Harris County Flood Control District.

Officials in Houston were also keeping an eye on infrastructure such as bridges, roads and pipelines that are in the path of the floodwaters.

Water in the Houston Ship Channel, which serves the Port of Houston and Houston’s petrochemical complex, is at levels never seen before, Linder said.

The San Jacinto River, which empties into the channel, has pipelines and roads and bridges not designed for the current deluge, Linder said, and the chance of infrastructure failures will increase the “longer we keep the water in place.”

Among the worries is debris coming down the river and crashing into structures and the possibility that pipelines in the riverbed will be scoured by swift currents. In 1994, a pipeline ruptured on the river near Interstate 10 and caught fire.

After five consecutive days of rain, Harvey set a new continental U.S. record for rainfall for a tropical system.

The rains in Cedar Bayou, near Mont Belvieu, Texas, totaled 51.88 inches (132 centimeters) as of Tuesday afternoon. That’s a record for both Texas and the continental United States, but it does not quite surpass the 52 inches (133 centimeters) from Tropical Cyclone Hiki in Kauai, Hawaii, in 1950, before Hawaii became a state.

Before it breaks up, Harvey could creep as far east as Mississippi by Thursday, meaning New Orleans, where Hurricane Katrina unleashed its full wrath in 2005, is in Harvey’s path.

Foreboding images of Harvey lit up weather radar screens on the 12th anniversary of the day Katrina made landfall in Plaquemines Parish.

Associated Press writers Frank Bajak and Michael Graczyk in Houston, Diana Heidgerd and David Warren in Dallas, Seth Borenstein in Washington and Tammy Webber in Chicago contributed to this report.