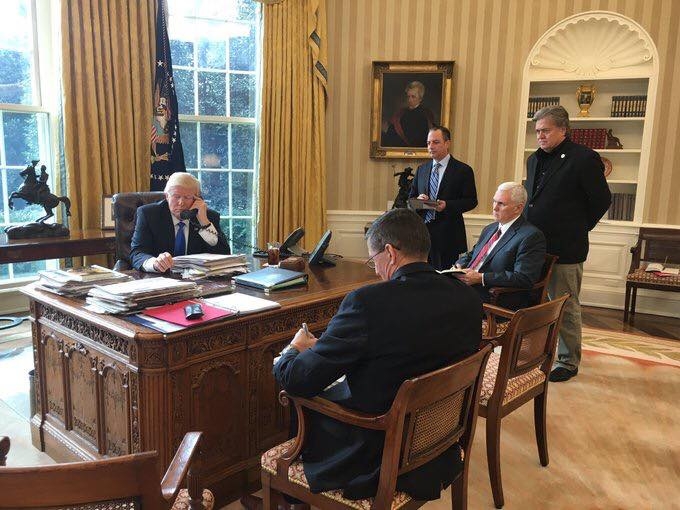 In an interview with The American Prospect posted online Wednesday, Bannon tells the liberal publication that the U.S. is losing the economic race against China. He also talks about purging his rivals from the Defense and State departments.

Bannon is also asked about the white supremacist movement, whose march on Charlottesville, Virginia, last weekend led to deadly violence. He dismisses them as “losers,” ″a fringe element” and “a collection of clowns.”

The White House did not immediately respond to requests for comment.

Trump tweeted earlier Wednesday that North Korean leader Kim Jong Un “made a very wise and well-reasoned decision” by backing down after heightening fears of nuclear conflict in a series of combative threats, including against the U.S. territory of Guam.

Bannon also outlined his push for the U.S. to adopt a tougher stance on China trade, without waiting to see whether Beijing will help restrain Kim, as Trump has pressed China’s leader to do. Trump also has lamented U.S. trade deficits with China.

“The economic war with China is everything,” Bannon says. “And we have to be maniacally focused on that. If we continue to lose it, we’re five years away, I think, 10 years at the most, of hitting an inflection point from which we’ll never be able to recover.”

Bannon was a key general election campaign adviser and has been a forceful but contentious presence in a divided White House. The former leader of conservative Breitbart News, Bannon has drawn fire from some of Trump’s closest advisers, including son-in-law Jared Kushner.

The president is under renewed pressure to fire Bannon, who has survived earlier rounds of having fallen out of favor with Trump.

Earlier this week, the president passed up an opportunity to offer a public vote of confidence in Bannon. Trump said he’s a “good person” and not a racist, adding that “we’ll see what happens with Mr. Bannon.”

The latest anti-Bannon campaign comes as Trump faces mounting criticism for insisting that white supremacist groups and those who opposed them were both at fault for deadly violence last weekend in Charlottesville, Virginia.

In the interview, Bannon muses about getting rid of administration officials who disagree with his strategy toward China and North Korea and replacing them with “hawks.”

“We gotta do this. The president’s default position is to do it, but the apparatus is going crazy,” Bannon says. “Don’t get me wrong. It’s like, every day.”