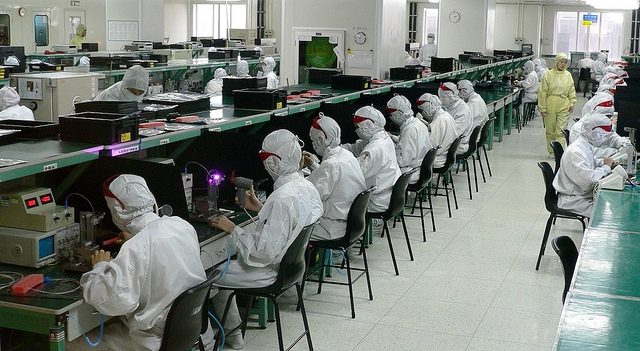 MADISON, Wis. — Wisconsin has won the fight to build the first U.S. assembly plant for electronics giant Foxconn in a project that’s expected to result in billions of dollars in investment in the state and create thousands of jobs in the congressional district of U.S. House Speaker Paul Ryan.

President Donald Trump plans to announce Wednesday that the Taiwan-based company has chosen Wisconsin for the project, according to an invitation to the White House event obtained by The Associated Press.

The AP obtained the invitation from a person with knowledge of the afternoon announcement, but the person wasn’t authorized to publicly release the information. Wisconsin Gov. Scott Walker tweeted earlier Wednesday that Trump planned to make a “major jobs announcement for Wisconsin.”

White House spokesman Josh Raffel confirmed the Trump announcement would be on Foxconn, but said he would not release details ahead of the event. Walker and several other Wisconsin officials, including Ryan and Democratic U.S. Sen. Tammy Baldwin, were expected at the event.

Wisconsin is among seven states that have been vying to land a Foxconn liquid crystal display panel plant. Republican leaders in the Wisconsin Senate have said Walker has been negotiating a memorandum of understanding with Foxconn — best known as the assembler of the iPhone — to build such a factory in southeast Wisconsin.

Foxconn did not immediately return messages seeking comment Wednesday. Other states vying for the plant are Michigan, Illinois, Indiana, Ohio, Pennsylvania and Texas.

Landing the multi-state competition has been cast as a once-in-a-generation opportunity. Foxconn is the biggest contract assembler of smartphones and other devices for Apple and other brands. It has been eyeing building the plant in a part of Wisconsin represented by Ryan, who said he has met with company officials at the request of Walker, a fellow Republican.

Critics have cautioned that Foxconn has made promises before to invest in the U.S. and not followed through. Foxconn promised in 2013, for example, to invest $30 million and hire 500 workers for a new high-tech factory in Pennsylvania, but it was never built.

Still, landing Foxconn would be a victory both for Trump, as he touts his build America agenda, and for Walker, who is up for re-election next year.

Wisconsin could be on the hook for billions of dollars in incentives as part of the deal, though no details of the state’s proposal have been released. State Sen. Alberta Darling, co-chair of the Wisconsin Legislature’s budget committee, said any deal would be examined with a “fine-toothed comb” and need to win approval by the Republican-controlled Legislature.

White House Chief of Staff Reince Priebus, who is from Ryan’s congressional district in southeast Wisconsin, told WTMJ-TV on Tuesday that Trump, when flying over the area in Kenosha County during a visit to Wisconsin in April, noticed vacant land where a former Chrysler Motors plant used to be.

“He said, ‘That land should be used,’” Priebus said. “So when Foxconn came into the White House, into the Oval Office, the president said, ‘I know a good spot that you should go to, that place in Kenosha.’”

That part of the state is an attractive location for a large plant because of the area’s proximity to Lake Michigan and its abundant water supply. To make flat-panel displays, the company will need access to great quantities of water to keep work spaces dust-free, among other things.

The news sent a jolt of excitement across Wisconsin, even among longtime Democratic critics of Walker.

Barca, like many Democrats, voiced concern about how much taxpayers may have to contribute in tax breaks and other incentives.

“We want to make sure it’s a fair deal for everybody,” he said. “We want a win-win-win.”