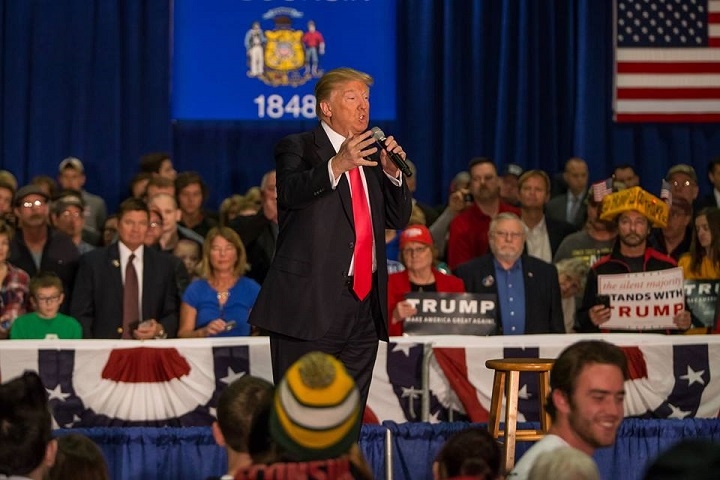 Trump has called the paper the failing NYT and fake news, yet has done five sit-downs there in six months.

NEW YORK — President Donald Trump has repeatedly denounced The New York Times as “fake news,” yet he’s granted more interviews to its reporters since taking office than any other media outlet except for Fox News Channel.

The latest provided the newspaper with its top headline Thursday, a wide-ranging talk during which the president said he never would have appointed Attorney General Jeff Sessions had he known Sessions would recuse himself from overseeing the investigation into Russia’s involvement in the last election, and warned Special Counsel Robert Mueller against looking into the Trump family finances.

“There is so much about him that is so incredibly contradictory, you can just add this to a very long list,” said Kyle Pope, editor and publisher of the Columbia Journalism Review.

This was Trump’s fifth Times interview since his inauguration six months ago, not including a brief encounter with Times magazine writer Mark Leibovich during a visit to the White House this spring. As president-elect, Trump traveled to the Times office to meet with its editorial board, and gave another interview to Michael Shear and David Sanger as president-elect. Trump called Times reporter Maggie Haberman shortly after his inauguration to discuss his new life.

Here are the excerpts from the transcript.

Trump has sat down with Fox News reporters seven times as president, said Mark Knoller, the CBS News White House correspondent who keeps a running count of presidential interviews. The Times’ most heated competitor, The Washington Post, has gotten one interview, he said.

Trump frequently praises Fox News, yet you don’t have to search very hard through his Twitter feed to find condemnations of the Times. He’s specifically attacked the Times more than 20 times on Twitter this year. In addition to calling the Times “fake news,” an epithet he’s also used for CNN and others, he’s repeatedly labeled the newspaper as “failing,” a description the company’s executives say is at odds with the facts.

On Jan. 29, five days after Haberman’s first interview with him as president was printed, Trump raged on Twitter: “Somebody with aptitude and conviction should buy the FAKE NEWS and failing @nytimes and either run it correctly or let it fold with dignity.”

Trump said on March 30 that the Times has “disgraced the media world” and gotten him wrong for two years. The Times “has become a joke,” he wrote on Feb. 24. And the newspaper was lumped in with NBC, CBS, ABC and CNN as “an enemy of the American people.”

All of this feels familiar to L. Timothy O’Brien, author of “TrumpNation: The Art of Being the Donald.” As a Times reporter who covered Trump’s real estate business for several years, O’Brien was courted by Trump with invitations to his home and airplane. Yet Trump also called his editors to complain when displeased with O’Brien’s stories, he said.

“Donald Trump is a kid from Queens,” O’Brien said. “He grew up in New York. I think he’s always regarded coverage in The New York Times as something akin to the Good Housekeeping seal of approval.”

His deep need for approval from the Times leads to him being particularly hurt when the newspaper writes something that displeases him, O’Brien said. Yet Trump doesn’t lose sight of the newspaper’s importance, he said.

Trump doesn’t have the same relationship with CNN, the news organization that he attacks most frequently, and often quite personally by citing Jeff Zucker, the network’s top executive. CNN hasn’t interviewed Trump as president. Yet CNN employs Haberman as a contributor, and she’s often on the air to talk about Trump, including Wednesday night after the latest Times interview was released.

Haberman has interviewed Trump four of the five times the newspaper has talked to him as president, twice with colleagues and twice by herself. Haberman’s pushing also led to a previously off-the-record conversation with reporters on Air Force One being placed on the record.

Even after getting the most recent interview, the Times on Thursday posted a fact-check that said Trump “made a number of misleading and false claims about health insurance, his legislative accomplishments, the biography of his deputy attorney general and French history.” Television critic James Poniewozik published a piece Thursday where he called Trump’s favorite morning show “Fox & Friends” ″an interactive magic mirror for Donald J. Trump.”

Trump’s relationship with the Times is one of the things that make his “war on the media” feel false, even as it has real implications by leading to increased harassment and attacks on the media by others, Pope said.

“It’s a very calculated move that he knows will enliven his base,” he said. “It’s a fake news war for him.”

There’s a telling exchange at the end of the most recent Times interview, where he asks the reporters to “just treat it fairly.” He left the reporters with the clear impression that “if you’re fair to me, see you soon,” interviewer Michael S. Schmidt said in a Times podcast.

Pope found that telling, as both an implicit threat and indication of how much Trump valued the newspaper.