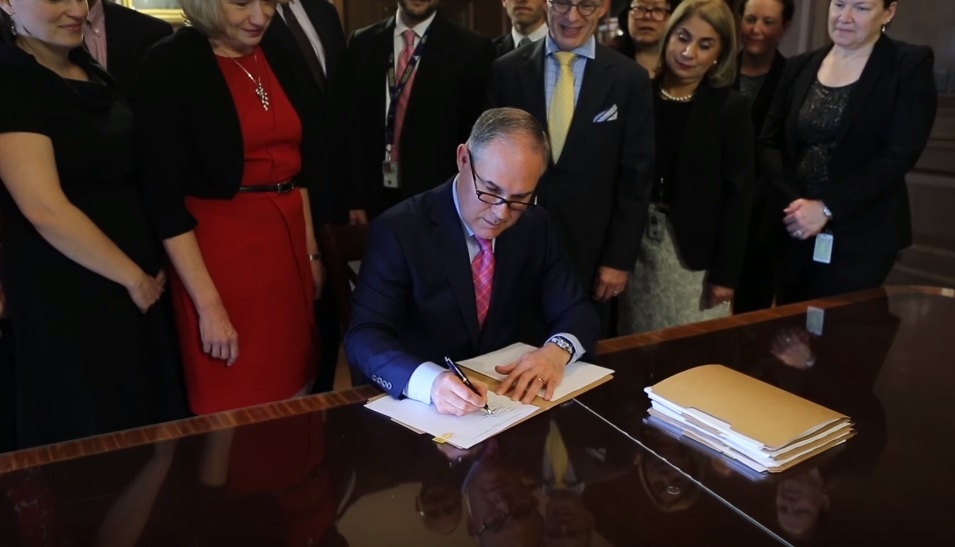 WASHINGTON — The Trump administration’s top environmental official met privately with the chief executive of Dow Chemical shortly before reversing his agency’s push to ban a widely used pesticide after health studies showed it can harm children’s brains, according to records obtained by The Associated Press.

Environmental Protection Agency Administrator Scott Pruitt’s schedule shows he met with Dow CEO Andrew Liveris on March 9 for about a half hour at a Houston hotel. Both men were featured speakers at an energy industry conference.

Twenty days later Pruitt announced his decision to deny a petition to ban Dow’s chlorpyrifos pesticide from being sprayed on food, despite a review by his agency’s scientists that concluded ingesting even minuscule amounts of the chemical can interfere with the brain development of fetuses and infants.

EPA spokeswoman Liz Bowman said Tuesday that Pruitt was “briefly introduced” to Liveris at the conference.

“They did not discuss chlorpyrifos,” Bowman said. “During the same trip he also met with the Canadian minister of natural resources, and CEOs and executives from other companies attending the trade show.”

EPA released a copy of Pruitt’s March meeting schedule earlier this month following several Freedom of Information Act requests. Though his schedule for the intervening months has not yet been released, Bowman said Pruitt has had no other meetings with the Dow CEO. There was a larger group meeting that Pruitt attended which also included two other Dow executives, but she said that didn’t involve chlorpyrifos.

Dow, which spent more than $13.6 million on lobbying in 2016, has long wielded substantial political power in the nation’s capital.

When President Donald Trump signed an executive order in February mandating the creation of task forces at federal agencies to roll back government regulations, he handed the pen to Dow’s chief executive, who was standing at his side. Liveris heads a White House manufacturing working group. His company also wrote a $1 million check to help underwrite Trump’s inaugural festivities.

The American Academy of Pediatrics urged Pruitt on Tuesday to take chlorpyrifos off the market. The group representing more than 66,000 pediatricians and pediatric surgeons said it is “deeply alarmed” by Pruitt’s decision to allow the pesticide’s continued use.

“There is a wealth of science demonstrating the detrimental effects of chlorpyrifos exposure to developing fetuses, infants, children, and pregnant women,” the academy said in a letter to Pruitt. “The risk to infant and children’s health and development is unambiguous.”

The AP reported in April that Dow is also lobbying the Trump administration to “set aside” the findings of federal scientists that organophosphate pesticides, including chlorpyrifos, are harmful to about 1,800 critically threatened or endangered species.

The chemical is similar to one developed as a weapon in World War II. Dow has been selling Chlorpyrifos for spraying on citrus fruits, apples, cherries and other crops since the 1960s. It is among the most widely used agricultural pesticides in the United States. Dow sells about 5 million pounds domestically each year.

As a result, traces of the chemical are commonly found in sources of drinking water. A 2012 study at the University of California at Berkeley found that 87 percent of umbilical-cord blood samples tested from newborn babies contained detectable levels of chlorpyrifos.

Dow, which sells chlorpyrifos through its subsidiary Dow AgroSciences, contends it helps American farmers feed the world “with full respect for human health and the environment.”

Under pressure from federal regulators over safety concerns, Dow voluntarily withdrew chlorpyrifos for use as a home insecticide in 2000. EPA also placed “no-spray” buffer zones around sensitive sites, such as schools, in 2012. But environmental and public health groups said those proposals don’t go far enough and filed a federal lawsuit seeking a national ban on the pesticide.

In October 2015, the Obama administration proposed banning the pesticide’s use on food. A risk assessment memo issued in November by nine EPA scientists concluded: “There is a breadth of information available on the potential adverse neurodevelopmental effects in infants and children as a result of prenatal exposure to chlorpyrifos.”

The law requires EPA to ensure that pesticides used on food in the United States are safe for human consumption — especially children, who are typically far more sensitive to the negative effects of poisons.

Pressed at a congressional hearing this month to cite evidence that chlorpyrifos is safe, Pruitt said his decision was based on “meaningful data and meaningful science.”

Asked by AP to provide details, Pruitt’s office responded with quotes from media releases from trade groups and the U.S. Department of Agriculture attesting to the chemicals usefulness to farmers, but did not offer scientific studies on its safety.

“Despite several years of study, EPA has concluded that the science addressing chlorpyrifos remains unresolved,” Bowman said Tuesday. We will make a decision based on the science, not on real — or perceived — pressure from companies or environmental activists.”

Before coming to EPA in March, Bowman directed issue advocacy and communications for the American Chemical Council, an industry trade group of which Dow is a member.

At a hearing Tuesday, Sen. Tom Udall again challenged Pruitt to cite a single peer-reviewed study showing chlorpyrifos is safe. Pruitt responded that he had relied on “interagency dialogue” with USDA before denying the petition to ban the chemical.

EPA says its next review of the chemical’s safety will occur by October 2022, the next statutory deadline for the agency to perform a legally mandated review of chlorpyrifos’ safety. That would mean Dow’s product will potentially remain on the market well after the expiration of President Trump’s current term.