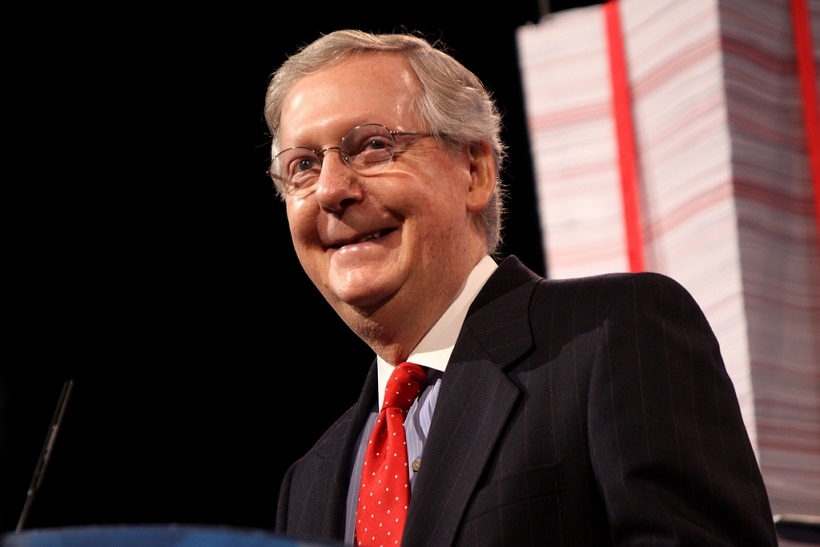 Schumer’s demands: no Medicaid cuts, no tax cuts for wealthy.

A day after McConnell, short of votes, unexpectedly abandoned plans to whisk the measure through his chamber this week, fresh GOP critics popped forward. Some senators emerged from a party lunch saying potential amendments were beyond cosmetic, with changes to Medicaid and Obama’s consumer-friendly insurance coverage requirements among the items in play.

“There’s a whole raft of things that people are talking about, and some of it’s trimming around the edges and some of it’s more fundamental,” said Sen. Bill Cassidy, R-La. “Right now, they’re still kind of, ‘Can we do it?’ and I can’t answer that.”

Yet while this week’s retreat on a measure McConnell wrote behind closed doors dented his reputation as a consummate legislative seer, no one was counting him out.

“Once in Glacier National Park I saw two porcupines making love,” said Sen. Pat Roberts, R-Kan. “I’m assuming they produced smaller porcupines. They produced something. It has to be done carefully. That’s what we’re doing now.”

Having seen the House approve its health care package in May six weeks after an earlier version collapsed, Democrats were far from a victory dance.

“I expect to see buyouts and bailouts, backroom deals and kickbacks to individual senators to try and buy their vote,” said Senate Minority Leader Chuck Schumer, D-N.Y. “What I don’t expect to see, yet, is a dramatic rethink of the core” of the bill.

A day after McConnell prodded Republicans by saying a GOP failure would force him to negotiate with Schumer, the New Yorker set a price for such talks – no Medicaid cuts or tax reductions for the wealthy. No negotiations seem imminent.

Facing a daunting equation – the bill loses if three of the 52 GOP senators oppose it – the list of Republicans who’ve publicly complained about the legislation reached double digits, though many were expected to eventually relent. Sen. John McCain, R-Ariz., said “of course” his support was uncertain because he wants to ease some of the measure’s Medicaid cuts, and Sen. Ben Sasse, R-Neb., told The Omaha World-Herald that the bill was not a full repeal, adding, “Nebraskans are dissatisfied with it and so am I.”

McConnell, R-Ky., wants agreement by Friday on revisions so the Senate can approve it shortly after returning in mid-July from an Independence Day recess. Several senators scoffed at that timetable, with McCain saying, “Pigs could fly.”

At the White House, Trump continued his peculiar pattern of interspersing encouragement to GOP senators trying to tear down Obama’s 2010 statute with more elusive remarks.

Trump told reporters that Republicans have “a great health care package” but said there would be “a great, great surprise,” a comment that went without explanation. On Tuesday, he said it would be “great if we get it done” but “OK” if they don’t, and two weeks ago he slammed as “mean” the House version of the bill that he’d previously lionized with a Rose Garden ceremony.

GOP support for the measure sagged this week after a report by the nonpartisan Congressional Budget Office estimated that it would produce 22 million fewer insured people by 2026 while making coverage less affordable for many, especially older and poorer Americans. It wasn’t helped when an NPR/PBS NewsHour/Marist Poll said that 17 percent of people approved of the Senate bill.

McConnell showed no signs of abandoning his push for the legislation.

“We’ll continue working so we can bring legislation to the floor for debate and ultimately a vote,” he said as the Senate convened Wednesday.

To succeed, McConnell must balance demands from his party’s two wings. It’s a challenge that’s intricate but not impossible, with some saying an eventual compromise could include elements both want.

Centrists from states that expanded Medicaid health insurance for the poor under Obama’s law are battling to ease the bill’s cutoff of that expansion, and to make the measure’s federal subsidies more generous for people losing Medicaid coverage. These senators, including Ohio’s Rob Portman and West Virginia’s Shelley Moore Capito, also want expanded funds to ease the death toll from the illegal use of drugs like opioids.

Each group has been trying to grow its numbers to boost clout with McConnell.