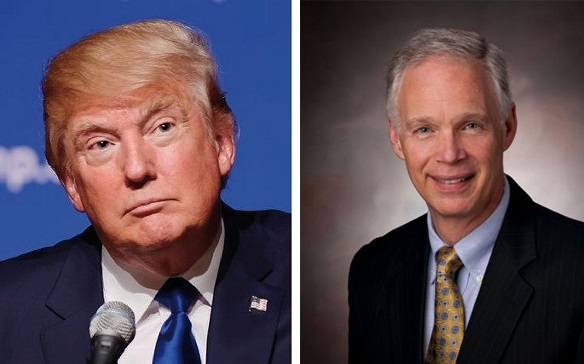 With slim 52-member majority, Johnson could be pivotal vote.

MADISON, Wis. — Conservatives and liberals in Wisconsin both see hope in Republican Sen. Ron Johnson’s steadfast refusal to back the current version of the GOP Senate health care bill.

Although they disagree with the reasons for his opposition, liberals see Johnson’s stand as a chance to sink the entire Republican effort to kill the existing health care law enacted under former President Barack Obama.

The senator’s fellow conservatives, including Gov. Scott Walker, are praising his attention-grabbing opposition to the bill and are urging him to seek changes to ensure Wisconsin wouldn’t be penalized for rejecting federal money to expand Medicaid.

It’s an unusual position for Johnson, who typically toes the party line. But his supporters are confident that when it comes time to vote on whether to replace the Affordable Care Act, Johnson’s longtime distaste for the law also known as Obamacare will prevail.

“I’m going to give him some breathing room,” said Kathy Kiernan, a retired Republican voter from Richfield. “I hope he can make things better. I’m holding my fire on this.”

Republican Rep. Sean Duffy, of Wisconsin, expects that Johnson will vote to repeal and replace the Affordable Care Act “when he is comfortable with the bill.”

With a slim 52-member majority, Johnson could prove to be a pivotal vote as Senate Republicans try to pass the bill. His opposition to a vote this week contributed to Senate leaders on Tuesday delaying it until sometime after the July 4 holiday. Johnson is one of four Republican senators who oppose the current bill, though he insists he wants to improve it, not kill it.

“I’m just grateful leadership decided, ’Let’s take our time, give this more thought, and try and get this right,’” Johnson said Tuesday. “The pressure we’re under timewise is these markets that are collapsing under Obamacare. It’s a big mess.”

Still, liberals see Johnson’s current position as a chance for them to bury the Senate’s bill, which Congress’ nonpartisan budget office said would leave 22 million more people uninsured by 2026.

“People should do their due diligence to convince Ron Johnson that they can’t fix this bill,” said Scot Ross, leader of a liberal advocacy group One Wisconsin Now. “It’s an opportunity to try and stop it and everyone should be taking advantage of it.”

So far, they are.

Numerous groups, including those representing doctors, the disabled and nursing homes, are urging their members to call, email or stop by Johnson’s district offices to tell their stories and urge him to protect Medicaid.

“There are people from all over the state who are calling and telling me his voicemails are full, they’ll call tomorrow,” said Lisa Pugh, director of The Arc Wisconsin, which advocates for people with disabilities.

Johnson’s spokesman didn’t immediately know how many voters had contacted his office about the bill. Democratic Sen. Tammy Baldwin’s office said it has been contacted 25,000 times this year by people who opposed either the House or Senate health care bills, with only 750 in support.

“We should be working together to make things better, not worse,” Baldwin said in a statement.

Johnson supports the Senate bill’s Medicaid cuts, which liberals and moderate Republicans oppose. But he has criticized the measure for the increased federal funding it would put toward subsidies for people buying coverage. He also said it wouldn’t eliminate enough of Obama’s regulations on insurers, including protections for consumers with pre-existing medical conditions. Johnson called it “wimpy reform” on Monday.

Walker — like groups representing the state’s doctors and hospitals — opposes the current bill because it would penalize Wisconsin, which has turned down nearly $700 million in federal Medicaid expansion money, and lock in a system of funding disparity between expansion and non-expansion states.

Johnson, who spent his career helping to start and run a plastics manufacturing company, was one of the most strident critics of Obamacare, making its repeal a key plank of his 2010 and 2016 campaigns. He promised not to seek a third term, which might be freeing him to speak more candidly than he would have otherwise.

Kiernan said Johnson’s opposition to Obamacare was a big reason why she supports him, but she also trusts his judgment that he needs more time to work on improvements to the bill and won’t ultimately sink it.

“I think he wants it all to work out in the end, I truly do,” Kiernan said.

Democratic Rep. Mark Pocan, who represents south-central Wisconsin and is one of the most liberal members of Congress, issued rare praise for Johnson on Tuesday and held out hope that his opposition would lead to improvements.

“There will be a tremendous amount of pressure put on him,” Pocan said. “We’ve had some mavericks from Wisconsin before. Let’s see if he can hold out this week.”