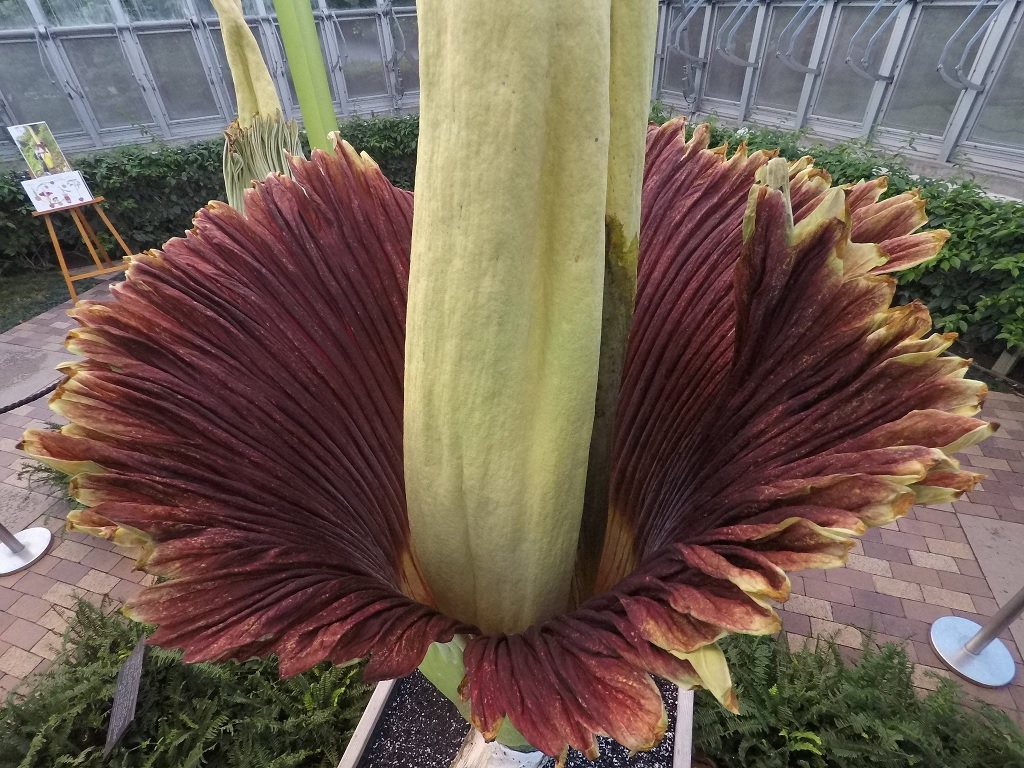 SAN FRANCISCO — Plant lovers in Northern California are getting a rare treat as two corpse flowers bloom for the first time in a decade.

Hundreds of people are flocking to the San Francisco Conservatory of Flowers after it issued a “stink alert” on Thursday that the 8-foot-tall plant from Sumatra was beginning to unfurl its frilly purple-and-green leaf around a yellow spike.

When it’s blooming, the flower known as Titan Arum emits a stench redolent of rotting flesh.

The conservatory is extending its hours Saturday so visitors can gaze at the giant flower and get a whiff of its putrid odor. The smell peaks for no more than 48 hours before the flower begins to collapse.

The plant was donated by a San Francisco man after it began to overtake the bathroom in his small apartment. Sidney Price told KQED News he bought a seedling of the corpse flower after witnessing one bloom at the University of California Botanical Garden in Berkeley in 2010.

“It smelled like dead possum,” Price recalled. “It was pretty pungent and intense.”

I went to the SF Conservatory of Flowers to see (and SMELL) their corpse flower! It blooms once every ~10 years! pic.twitter.com/JW9Stv0a5v

He said he was thrilled to see the plant thrive in the moist environment of his bathroom, but as it got bigger he worried about the consequences of an untimely bloom. “I was worried I’d be away on a trip and somebody would call the police and tear down my door because they thought a dead body was inside,” he said.

Price said he had to let go of the plant when one of its gigantic leaves reached 7 feet.

Meanwhile, a nursery in Sebastopol, about 50 miles north of San Francisco, is anticipating that its corpse flower will bloom next weekend. Two have also bloomed in Chicaog

Damon Collingsworth, the owner of California Carnivores nursery, said he also bought a 2-year-old seedling from the botanical garden in Berkeley in 2010. He has watched it grow to about 3 feet tall and expects it to double in size when it blooms.

He named the plant Audrey II, after the plant that eats people in “Little Shop of Horrors.”