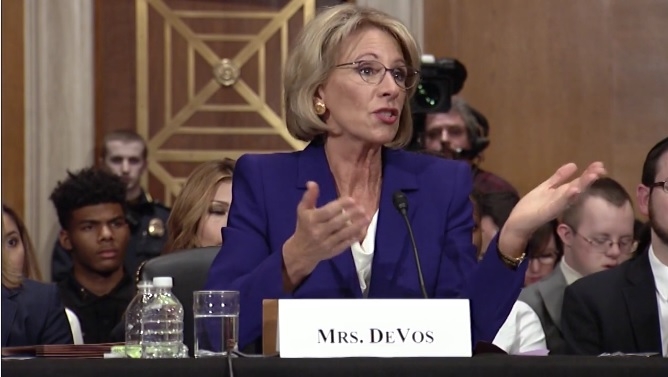 WASHINGTON — Education Secretary Betsy DeVos said Tuesday that schools receiving federal money should follow federal law, but she would not commit to banning discrimination against LGBT students in private schools.

The Trump administration’s budget proposal significantly cuts funding for teacher training and after-school programs and student financial aid, while boosting funding for charter schools and vouchers that parents can use to send children to private schools. Critics fear that private religious schools may discriminate against students based on sexual orientation, gender identity, religion or disability.

DeVos was asked during a Senate subcommittee hearing on Tuesday whether such discrimination would be allowed. DeVos said: “Schools that receive federal funds must follow federal law, period.”

But when Sen. Jeff Merkley, a Democrat from Oregon, said federal law is unsettled on LGBT discrimination and pressed DeVos to elaborate, she indicated that was not her call to make: “On areas where law is unsettled, this department is not going to be issuing decrees; that is a matter for Congress and the courts to settle.”

“I don’t support discrimination in any form,” DeVos added.

Similarly, DeVos was asked by Sen. Jack Reed, a Democrat from Rhode Island, whether non-traditional public schools receiving federal funding will be required to accept all students, including students with disabilities, DeVos would not directly answer the question, saying only that schools accepting federal money should follow federal law.

“By once again turning a blind eye to LGBTQ students who experience discrimination in school, Secretary DeVos continues to prove why she was the wrong choice to lead our nation’s education system,” said Sarah Kate Ellis, president and CEO of GLAAD, a leading advocacy group. “If she wants to be known as more than an anti-LGBTQ activist, the time is now to reverse course.”

Mike Petrilli, president of the conservative Thomas B. Fordham Institute, said DeVos was right when she said there are currently no federal civil rights protections with regard to LGBTQ students. But he added that DeVos should have been more clear when talking about the $240 million school choice initiative included in the budget.

“That’s a fair question,” Petrilli said. “If she is serious about proposing it and wants it to actually have a chance of getting enacted by Congress, then she should be clear about what rules private school participating in the initiative would have to follow.”

DeVos is facing an uphill struggle defending President Donald Trump’s education budget. Sen. Roy Blunt, of Missouri, chairman of the Appropriations subcommittee dealing with education spending, said at the start of the hearing that the cuts laid out in the budget will be difficult or even “all but impossible” to accept.

Martin West, associate professor of education at Harvard University, said that judging by Congress’ “lukewarm” response, passing the education portion of the budget will be a long shot. “The attention that these controversies have generated only lengthens the odds,” he said.

The hearing saw some lively moments. Sen. John Kennedy, a Republican from Louisiana, compared education to mayonnaise. Kennedy said he can choose from six different types of it in a grocery store, but parents are not afforded the same kind of choice when it comes to schools.

Sen. Chris Murphy, a Democrat from Connecticut, fired back.

“With all the due respect for my colleague from Louisiana, education is not mayonnaise,” Murphy said. “Frankly, the day that we start treating the education of our children like we do the marketing of condiments, we give up on our kids.”