Even if you win the $1.4 billion Powerball, you lose

One could guarantee winning
jackpot for $585 million

The Powerball jackpot is estimated to be $1.4 billion.

Now, at least in Minnesota, lottery officials are urging restraint, like its telling people not to buy tickets. 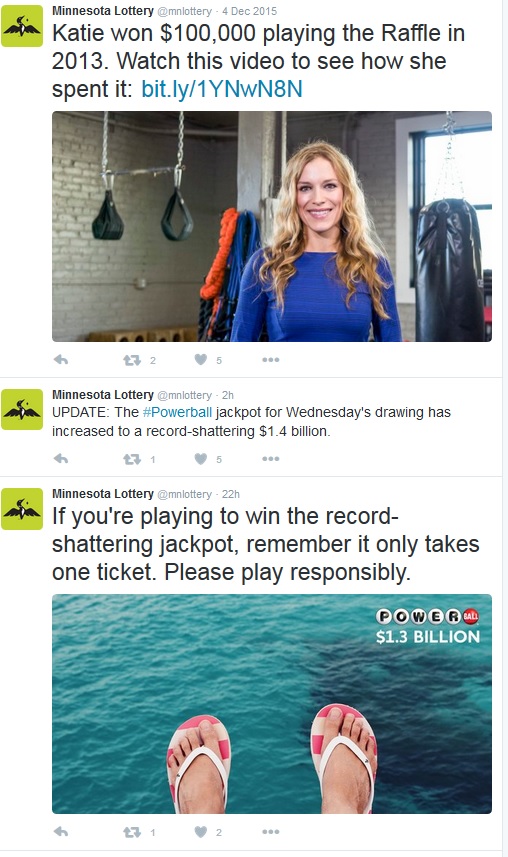 The Minnesota Lottery is running ads, on radio and posting on social media, telling people to play within their budgets and not get carried away.

But, perhaps as expected, on Twitter, the “play responsibly” tweet is followed by the jackpot amount and, most recently, a post of an attractive woman who won $100,000 in 2013 (right) pinned to the top of the page.

Those playing have a 1 in 292.2-million chance of winning the jackpot.

If you had the time – to print every ticket – and money, you could buy every winning ticket combination for about $584 million.

That would guarantee the jackpot and, taking the lump sum, it would be $806 million. And, after federal taxes, that would leave you with just $486.8 million – still less than buying every winning ticket combination.

If you went the traditional route, and bought a computer-generated ticket for $2 – as 92 percent do – and hit the jackpot, getting all that money all at once once means facing a billion problems you didn’t have before.

Financial counselor Jim Naleid of Naleid and Associates in La Crosse, talked about the kind of steps to take to handle sudden fortune and fame.

First and foremost is (to hire) a legal and a tax council,” Naleid said. “The money sounds good, but, historically, it creates huge problems and ruins a lot of lives in the process, when it’s that big and that fast.

“It happens to athletes. It happens to lottery winners. Without trusted and good council, we’ve seen what happens.”