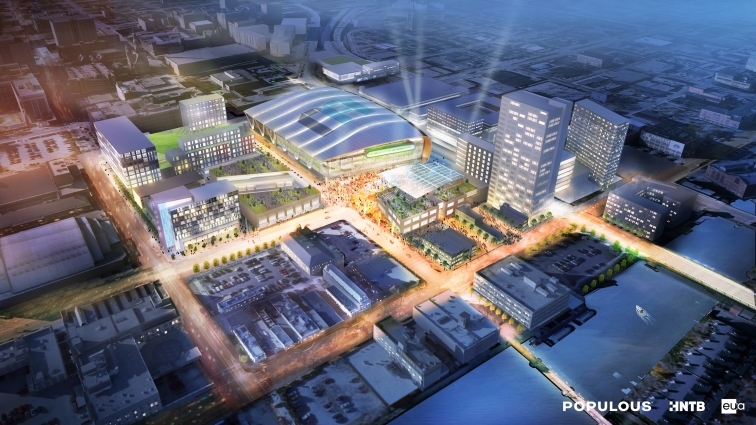 MADISON, Wis. (AP) The Wisconsin state Assembly has passed a bill to have taxpayers pay $250 million to help pay for a new Milwaukee Bucks arena.

The bill passed on a bipartisan 52-34 vote Tuesday. The measure now goes to Gov. Scott Walker who has been working with lawmakers to reach a deal.

Under the agreement, current and former Bucks owners will pay $250 million toward the cost of the arena. The taxpayer portion will eventually grow to about $400 million over 20 years in interest and borrowing costs.

Supporters say the new arena will bring jobs to Milwaukee and help improve the economy of the state. They say a new arena will help the city and state continue to move forward.

The Wisconsin state Assembly will back a plan to spend $250 million in public funds on a new arena for the Milwaukee Bucks, Republican and Democratic leaders said Tuesday, casting it as a good deal for the state’s taxpayers.

At a news conference after posing for pictures with Bucks coach Jason Kidd, leading legislators from both parties said the Assembly would pass the measure later Tuesday, which would then send it for approval to Republican Gov. Scott Walker, who was pushing for a deal. It passed the state Senate on a bipartisan 21-10 vote on July 15.

“Everyone can move on and the arena can be built,” GOP Assembly Majority Leader Jim Steineke told reporters.

Both Republicans and Democrats said the deal was good for Wisconsin because it would keep the Bucks and the income taxes paid by NBA players and staff in the state. Under the plan, taxpayers will be on the hook for $250 million initially, but that commitment will grow to $400 million with interest over 20 years. Current and former Bucks owners are contributing another $250 million to the arena plan.

There is also a $2 ticket surcharge.

“This is a fair plan. It’s actually taken everybody stepping up,” Republican Assembly Speaker Robin Vos said at the beginning of debate. He thanked Walker and a bipartisan group of state and Milwaukee-area office holders for negotiating to reach a compromise.

Vos said the team had ample opportunities to leave if it chose, referencing interest from Las Vegas in luring the Bucks away. He said he thinks the deal will benefit Wisconsin taxpayers no matter where in the state they live.

Bucks President Peter Feigin told the Legislature’s budget committee earlier this month that if construction on a new arena didn’t begin this year, the NBA would move the team, possibly to Las Vegas or Seattle.

The Legislature has tried to reach a deal to pay for a new arena for months. Republicans hold a 63-36 majority in the Assembly, but needed Democratic support because some in the GOP refused to have any taxpayer subsidy for a private arena, especially when funding is being cut for other public assets, including the University of Wisconsin. Supporters argue the economic benefits outweigh the cost of losing the team and the income taxes paid by NBA players and staff.