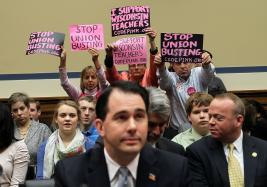 MADISON, Wis. (AP) Scores of protesters have returned to the Wisconsin Capitol rotunda a day after police launched another crackdown on them.

Protesters have been meeting in the rotunda during the noon hour nearly every day for the last two years to sing anti-Republican songs. On Wednesday police launched a crackdown on them, arresting nearly two dozen of them for not having a permit to gather in the building. The move enraged the group, who feel they’re exercising their free speech rights. On Thursday dozens more protesters showed up in the rotunda than Wednesday, many carrying cameras.